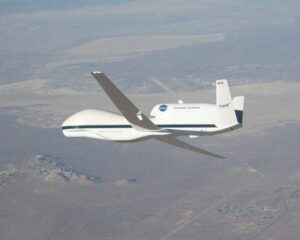 “In the last five years, the Global Hawk has flown over the eye of hurricanes, examined the effects of greenhouse gasses and conducted cutting-edge autonomous aerial refueling trials,” said George Guerra, vice president of the Global Hawk program for Northrop Grumman’s Aerospace Systems sector. “We are thrilled to continue our partnership with NASA and look forward to more scientific and technological breakthroughs in the next five years.”

The agreement will continue until April 30, 2018, and allows for joint use and shared cost of the NASA Global Hawks. The initial Space Act Agreement, signed April 30, 2008, returned two preproduction Global Hawk aircraft to flight status. Under the partnership, a permanent ground control station was built at Dryden Flight Research Center, which is based at Edwards Air Force Base, Calif.

The high-altitude, long-endurance capabilities of the Global Hawk are uniquely suited to scientific research. Scientists from NASA, the National Oceanic and Atmospheric Administration and universities have capitalized on the range and dwell time of the Global Hawk.

Access to wide areas and remote locations of the world has allowed Global Hawk to collect data for a variety of science research missions, including:

The Global Hawk is a fully autonomous, high-altitude, long-endurance unmanned aircraft system that can fly up to 65,000 feet for 30 hours at a time. Its endurance and range allow for nonstop flights from NASA Dryden in Southern California to the North Pole and remaining for up to seven hours over the polar region before returning to Dryden.