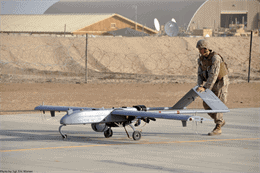 VMU-2, with the RQ-7B Shadow, practiced providing the infantry with near real-time full motion video increased communications capabilities. With a constant stream of information from UAVs, ground commanders can react quickly to previously unseen threats and move decisively against targets of opportunity.

The battalion was training in convoy operations and clearing urban terrain during an exercise in preparation for their upcoming deployment with the Black Sea Rotational Force.

“Having an eye in the sky helps the ground decision makers because it increases their situational awareness on the battlefield,” said Capt. Darrel Prestesater, a forward air controller with 2nd Bn., 2nd Marines.
A battalion often has their own small unmanned aerial systems, but the VMU brings a more capable platform with longer loiter capability via the RQ-7B Shadow.

“As far as the ground forces themselves, the battalions typically have an RQ-11 Raven or a Wasp, which is a small, hand-launched unmanned aerial system,” said Capt. Steven P. Rogers, the adjutant for VMU-2. “They’re pretty small, low-altitude, and are light weight, so they have small cameras.”

The Shadow flies much higher and can zoom in on potential targets with a powerful camera. It can also laser designate to guide smart munitions fired either from aircraft or artillery. In a deployed environment, authorized personnel can get near real-time footage and communicate with the unmanned aircraft commanders by instant messaging or through more conventional means.

Adding to the capabilities of the system, the squadron set up a “spoke” at Camp Lejeune near the battalion’s training area. The spoke is a command center set up at a separate location from the main VMU-2 location, which extends the operational range of the aircraft. Controllers at Cherry Point flew the aircraft from the launch site to an area both the Cherry Point operators and the spoke operators could control the aircraft, where it was handed off to the spoke.