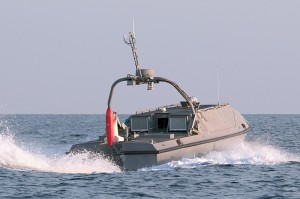 The Unmanned Influence Sweep System prototype performed well in tests during summer 2011. The orange attachment on the back of the vessel is deployed into the water and uses magnetic and acoustic signals to trick mines into exploding

A new unmanned vehicle will keep sailors and ships farther away from the danger of exploding mines.

The Unmanned Influence Sweep System is a surface vehicle that would travel aboard littoral combat ships and be deployed to trigger bombs.

The UISS has two main components: an unmanned surface vehicle, and an acoustic and magnetic minesweep system towed behind it, explained Capt. Duane Ashton, the program manager for unmanned maritime vehicles at Naval Sea Systems Command.

When the vessel is in mine-infested waters, it’ll deploy the orange sweep system stored on the back of the unmanned boat and tow it under the water. The system emits acoustic and magnetic signals that trick a mine into thinking a large ship is passing by, causing the mine to explode, Ashton said.

While sweeping, the surface vessel will be far enough away so that it will not be damaged by a detonating mine, Ashton said.

The UISS will be part of the mine countermeasures mission module for the LCS. The mine module is one of three — the others are for surface warfare and anti-submarine warfare.

The idea of the mission modules is to make littoral combat ships flexible. The plan is for modules to be quickly installed or uninstalled when the mission needs to be changed. However, recent reports have suggested that swapping LCS modules will not be as quick and easy as officials had hoped, and could take up to a couple of weeks.

The Navy wants 52 of the minesweeping systems: one each for the 24 planned mine modules, six for training, plus additional replacements.

Sailors will likely begin to see the mine module in the fleet in fiscal 2017, Ashton said.

While the UISS is designed for the LCS, Ashton added that he didn’t see any reason why it could not someday be on other types of ships.

Because the robot is semiautonous, no one onboard the LCS will need to steer it, Ashton said, but minemen will be observing its progress from the ship.

Navy officials tested a prototype of the UISS in October 2011 in Panama City, Fla.

“The test was to verify and validate the concept of an unmanned influence sweep system, and it ended up being successful,” Ashton said.

Previous tests in the summer of 2011 focused on the ability to deploy and recover the mine-sweeping system. Ashton also said Navy officials made sure the prototype would fit onboard both versions of the LCS, though the exact dimensions of the vessel may change once industry is asked for proposals.

In operational tests, the unmanned vessel wasn’t reporting back to a real ship, Ashton said. Rather, a test van that mimics the capability of an LCS was on an oceangoing tug during the test.

The Navy held an industry day Jan. 24 to give companies an idea of what their military requirements would be for the project, and officials expect to issue a request for proposals to potential makers soon.

Another mine-hunting tool that will hit the fleet around the same time is the Knifefish, an unmanned underwater vehicle that’s also part of the mine countermeasures mission package on the LCS.

The Knifefish could be deployed from an LCS to look for buried or partially buried mines along the sea floor. It’s possible that information collected by the Knifefish on mine locations will inform where the UISS should go sweep, though the information must pass through an operator onboard the LCS; the two systems cannot communicate directly.

“The whole idea there is working together in an integrated fashion to provide capability for hunting and sweeping,” Ashton said.

The first mine countermeasures mission package for the LCS will also include an MH-60S helicopter, the Airborne Laser Mine Detection System, the Airborne Mine Neutralization System and the Remote Minehunting System, which will tow a sonar device to detect and identify mines, according to Navy spokesman Christopher Johnson.