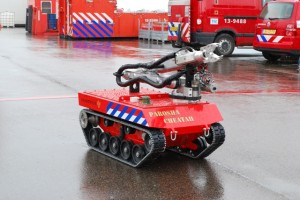 Parosha Innovators B.V., based in St. Annaparochie (The Netherlands), have developed a versatile deployable UGV robot: the Parosha Cheatah GOSAFER. The robot is designed to support the emergency services in a range of tasks, including the transportation of materials (it has a payload of 1000kg), reconnaissance and surveillance, detection and inspection, EOD, and rescue missions.