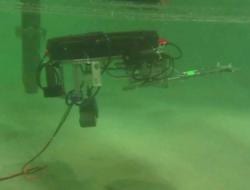 Washington State University (WSU) students have completed a self-operated robotic submarine which has been entered into the International RoboSub 2012 Competition in San Diego. The competition, now in its 16th year, is hosted by the Association for Unmanned Vehicle Systems International as well as the US Office of Naval Research.

American Grippers Inc has supported WSU’s Robsub team efforts, devoting time and resources to the project and supplying knowledge and hardware essential to the project’s completion.

Washington State University entered this competition for their first time last year and reached the Semi-Finals. The team placed 22nd out of 31 teams. In preparation for the competition during the school year, the software engineering component of the project’s time was largely consumed by writing code for a control system which interacted with hardware on the submarine. They were able to control the depth and movement of the sub, as well as to collect data input from all of the sensors.

The Robotic sub was made to shoot both torpedoes, drop both markers and actuate its pneumatic robotic gripper claw. A piece of software implemented last year was an image recognition program to detect and avoid obstacles. Obstacles within the competition include the starting gate, the heading paths, the buoys, the obstacle course, the torpedo targets and the bins for the markers.

The electrical engineering component made significant progress last year. They created custom PCB’s which delivered commands to and from the sub’s motor controllers, pneumatic valve banks, microcontrollers, depth sensors, gyroscope, accelerometer, and compass sensors. This group also had to focus its efforts on the mechanical systems in the AUV. They created the pressure case and frame, and had to assemble its required instrumentation. The AUV could be manually controlled to do almost every task required in the competition.

The primary source of sponsorship in the program was provided by Washington State College as well as by Naval Sea Systems Command (NAVSEA), these two groups provided both guidance and funding.

Company sponsors include AGI Automation Components and Clippard Minimatic. AGI manufactures robotic gripper pneumatically actuated which aid in automated manipulation of parts and machines which are used in industrial manufacturing every day.

Without the help of the pneumatic actuators, the AUV would not have been able to grip, rotate, and pick and place objects, drop markers, or fire torpedoes. WSU has voiced appreciation to all sponsors, including American Grippers Inc. AGI manufactures Pneumatic Automation components like grippers, rotaries and linear actuators.

Today’s sophisticated user of end-of-arm-tooling technology is confident in the capabilities and products of AGI, which are used for a variety of manufacturing processes including: Assembly, Pick and Place, Packaging, Loading & Unloading, and Part Transfer. For flexibility of design and accommodating use in the world-wide market, AGI products are available in imperial and metric versions. Manufacturing facilities the world over trust the automation components designed and manufactured by AGI American Grippers Inc.

The group recruited several mechanical engineers to construct the waterproof shell for the robot. The computer science students continue to perfect the code that will make the AUV operate and function autonomously. The electrical engineering students will continue to focus on making the sub’s hardware more adaptable, robust, and power-efficient. The club is looking forward to competitions to come, and hopes to continue their development in the ever-growing field of underwater robotics.