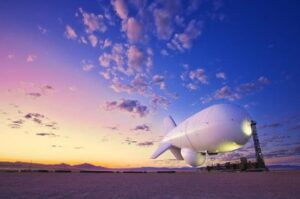 During the Raytheon-funded demonstration, and despite heavy smoke from recent, naturally-occurring forest fires, an MTS-B electro-optical/infrared (EO/IR) sensor mounted on a JLENS surveillance aerostat tracked numerous targets with the IR sensor.

Video from the MTS-B was passed through the aerostat’s tether, enabling operators to watch live feed of trucks, trains and cars from dozens of miles away. While the MTS-B visually tracked targets, the JLENS simultaneously tracked surface targets with its integrated radar system, demonstrating the potential to integrate the JLENS radar and EO/IR payloads.

“Integrating the proven MTS-B on JLENS makes JLENS multi-mission capable and enables the warfighter to better defend the battlespace and protect critical infrastructure and waterways.”