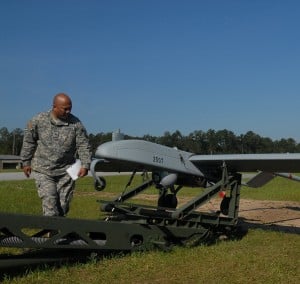 The facility specializes in proficiency and sustainment training for those working with unmanned aircraft. Army units such as the 3rd Infantry Division and others stationed in Germany, Italy, Korea, and Hawaii, have trained at the facility, said Warrant Officer Michael Bradburn, a facility technician.

Bradburn is one of 15 employees comprised of guardsmen, reservists, contractors, and federal technicians at the facility. The services they provide focus on identifying deficiencies units have upon arrival, assisting with the development of training schedules and providing guidance throughout the training, which is mainly focused on surveillance missions.

Major Jay Lovelady, the facility commander, said “the systems they maintain do much more than just surveillance. The UAS systems save lives by replacing human pilots on dangerous missions. It allows the Army to look at an area or an environment for a longer period of time”.

“That’s pretty big because you can establish a pattern of life,” said Lovelady. “They actually have people who are specialists in human behavior and they can watch this over time.”

These specialists are able to accurately predict enemy activity through changes in behavior patterns, he said. A change of behavior is an indication that something in their normal pattern has been disrupted.

“One of the great advantages of these systems is that they can be flown without anyone’s knowledge”, he said.

“When a helicopter rolls up, you can hear it from five miles away and you can see it. If the bad guy was doing something bad, he’s obviously going to stop. With this system, that changes”.

Soldiers are given the ability to react quicker using the UAS. The training at the facility is changing the way in which we fight.