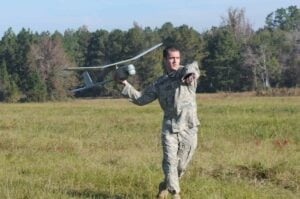 You might not notice them. Some are big and some are small. But they have their eyes on you as they glide silently through the skies above Camp Shelby.

Remote controlled? Yes. Battery operated? Yes. Joy sticks? Yes. These unmanned aerial systems may seem like toys but they aren’t; they are designed to provide intelligence, surveillance and reconnaissance capabilities to U.S. Forces in Afghanistan.

“They are not toys,” said Maj. Martin Lovelady, Camp Shelby Unmanned Aerial Regional Flight Center facilities commander. “They are used to save lives. Instead of sending Soldiers forward, we can send something out ahead of them which doesn’t cost a life.
“You can replace a piece of equipment but you can’t replace the life of the Soldier,” said Lovelady.

Camp Shelby Joint Forces Training Center is now the home to the nation’s only Unmanned Aircraft Regional Flight Center. As a training institute, the facility is a tenant unit that utilizes Camp Shelby’s airspace and facilities to conduct unmanned aerial training. Being that it is an Army National Guard flight center, it is the only one of its kind.

The installation which was selected from among 19 sites nationally, has welcomed many Tactical Unmanned Air System units for training prior to overseas deployment, and is home to a company of the 155th Heavy Brigade Combat Team, which has one of the Army’s 30 TUAS units placed nationwide, according to an Army Times article. The regional flight center will remain an active training center in times of peace as well.

The center trains UAS Soldiers both National Guard and active duty from all over the world by conducting readiness levels, continuation training, refresher training, proficiency flight evaluations and annual proficiency and readiness tests for the RQ-20 Puma, the RQ-11B Raven and also the bigger and faster RQ-7 Shadow.

“Not only is this important for the state of Mississippi but it’s important for the rest of the nation as well,” said Warrant Officer Michael Bradburn, Camp Shelby Unmanned Aircraft Regional Flight Center operations officer. “The flight center was put together to support the entire National Guard and on top of that, we can support numerous active duty units as well.”

But there is one thing that makes Camp Shelby stand out from others.

“One of the significant things that make Camp Shelby unique is that we own our own airspace,” said Bradburn. “We don’t have to borrow or buy it; so that allows units to come down here at a extremely low cost considering what they will have to pay if they go somewhere else.”

Hand launched in an open field on Camp Shelby, the aircrafts circles overhead while being operated by remote control. Soldiers observe computer screens examining video feed of what the aircraft sees.

With the same tactics, techniques and procedures, launching it in Afghanistan ahead of Soldiers will potentially see detailed pictures of enemy forces or road side bombs without the Soldier’s life being at risk.

Traditionally the Army would send a small scout team out forward and the inherit danger of that comes with either having the risk of being captured or injured, said Bradburn.
“Now we can put an aircraft up and send it out,” said Bradburn. “We can do IED scans and route reconnaissance. You take the person out of harms way and we give them the ability to see what’s coming before they get to where they are going.”

Camp Shelby serves as a training ground for the latest equipment and technology in the U.S. Army arsenal. As the flight center settles in at Camp Shelby, it will share its 135,000 training acres with another training institute, the 154th Regional Training Institute.

Camp Shelby Joint Forces Training Center became a mobilization station in June 2004. The training center continues to meet the challenges of providing for the nation’s defense by serving as a mobilization training center. Since then, the mission has evolved in planning, developing and providing a diverse and demanding training environment that evolves constantly to meet the new and emerging threats to our nation’s security.