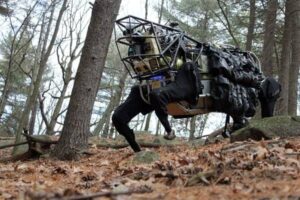 The warfighter who carries up to 100 pounds of equipment on his back is expected to get relief from the cumbersome weight, officials at the Defense Advanced Research Projects Agency say.

DARPA’s semiautonomous Legged Squad Support System — also known as the LS3 — will carry 400 pounds of warfighter equipment, walk 20 miles at a time, and act as an auxiliary power source for troops to recharge batteries for radios and handheld devices while on patrol.

“It’s about solving a real military problem: the incredible load of equipment our soldiers and Marines carry in Afghanistan today,” Hitt said. The consequences of that kind of load can be soft-tissue injuries and other complications, he added.

And as the weight of their equipment has increased, so have instances of fatigue, physical strain and degraded performance, officials have noted. Reducing the load warfighters carry has become a major point for research and development, DARPA officials say, because the increasing weight of equipment has a negative effect on warfighter readiness.

DARPA’s five-year, $54 million LS3 project began in September 2009, and now is undergoing trials in the field. The LS3 must become familiar with different types of terrain, from wooded areas to deserts, and with varying weather conditions such as rain and snow, Hitt explained.

The LS3 prototype completed its first outdoor assessment in January, demonstrating its mobility by climbing and descending a hill and exercising its perception capabilities.

Following a “highly successful” trial at Fort Pickett near Blackstone, Va., earlier this month, Hitt said, the robot worked with the Marine Corps Warfighting Laboratory there and developed additional behaviors.

The robot’s sensors allow it to navigate around obstacles at night, maneuver in urban settings, respond to voice commands, and gauge distances and directions. The LS3 also can distinguish different forms of vegetation, Hitt said, when walking through fields and around bushes. With the ability to avoid logs and rocks, the LS3’s intelligent foot placement on rough terrain is a key element, he said.

The next trial will challenge the robot with the desert terrain at Twentynine Palms Marine Corps Base in California, and subsequent trials will follow every three months, Hitt said.

“The vision is a trained animal and its handler,” he said, adding that a squad leader would learn 10 basic commands to tell the robot to do such things as stop, sit, follow him tightly, follow him on the corridor, and go to specific coordinates.

“The technology of the robot focuses on mobility, perception and human-robot interaction,” Hitt said.

With the expectation of delivering the first LS3 to a Marine Corps squad in two years, the program culminates a decade of research and development. Yet it still needs some tweaks, Hitt acknowledged.

“We have to make sure the robot is smart like a trained animal,” he said. “We need to make sure it can follow a leader in his path, or follow in its own chosen path that’s best for itself. The interaction between the leader and the robot [must be] intuitive and natural.”