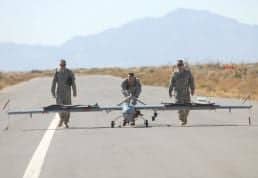 NIE 13.1 is a soldier-led series of evaluations that help develop, evaluate, test and integrate new proposed equipments and tactical procedures to improve the Army’s efficiency and effectiveness while reducing the soldier’s time and resources required for successful completion of mission.

The UAV is an unmanned aircraft flown by operators using a remote control to gather information through camera imagery. Operators and maintainers for the UAV are an integral part of the Army, providing information about the location of the enemy forces and potential battle areas by being the ‘eyes in the sky’ and relaying the information to commanders so they can take the appropriate actions.

“Our main goal is to help other soldiers stay safe,” said Spc. Robert Kendra, one of Company A’s unmanned aircraft systems repairers. “We have the UAV flying ahead of the convoys looking for improvised explosive devices and other dangerous situations.”

The current UAV system used by the Army is the Shadow 152; it is very effective but can evolve to meet the modernization of the Army’s communications strategies. The lines of communications between commanders and their troops have always been a high priority for the U.S. Army.

The Shadow 152 is currently using a Single Channel Ground and Airborne Radio System, which allow only the command post to view the images from the UAV. The inability to share the data with all of the troops sometimes creates a problem of communication.

Another disadvantage of using the SINCGARS radios is the operational limitations imposed by distance, weather and terrain.
The proposed Shadow 152A has been upgraded with Soldier Radio Waveform software, which allows both the command post and their troops to see the images that the UAV is projecting, as long as they are on the same frequency, which in turn may eliminate miscommunication.

The SRW will also increase the distance and area of communication significantly.

Sgt. 1st Class Jaime Castaneda, senior unmanned aircraft systems operator for Company A, said when called, a five-person team can get the UAV in flight in less than 30 minutes.

The soldiers of Company A will be working together for several weeks to support operations and conduct their own evaluations by maintaining and flying the UAV with the new software.

“The SRW will give the soldiers better situational awareness and further extend communication between the command team and troops on the ground without placing American lives in danger,” said Castaneda.