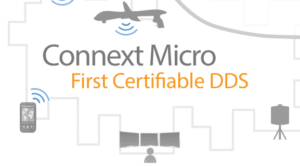 UAVs are rapidly becoming much more functional and complex. The new generation of UAVs employs multiple components and multiple processors that communicate over networks or buses and the communications infrastructure is a critical component.

The UCS project is addressing the interoperability challenge within the ground stations and UAVs. It spans over 500 companies working on many U.S. unmanned vehicles and ground station components. RTI provides Open Community Source Data Distribution Service (DDS) to the entire program. The new certifiable Connext Micro will enable use in safety-critical applications, such as flying in occupied air space.

Gordon Hunt, RTI’s chief applications engineer and the chair of the UCS Platform Architecture Committee explains, “DDS middleware provides an interoperable architecture and a modular implementation within both ground stations and UAVs. Certification evidence for Connext Micro enables a consistent implementation through these systems, including the safety critical components. Certification evidence for DDS middleware is critical for UCS as it enables modular architecture within both ground stations and UAVs. We need to develop common software architecture across the entire unmanned vehicle spectrum.”

Verocel is partnering with RTI to provide independent verification of the certification data. George Romanski, CEO of Verocel said, “We are pleased to work with RTI to ensure that safety and mission critical software receives the care, attention and rigor necessary to be confident that such systems will not fail. We are developing the certification data using the latest DO-178C guidance document in anticipation of the FAA’s imminent adoption.”

“As the leading vendor of DDS middleware, RTI is uniquely qualified to deliver and support this important technology to UCS and any organization requiring safety-critical software design,” said Edwin De Jong, Director of product management and strategy at RTI. “Today over 500 mission-critical applications, including combat management systems, radar, air traffic control, UAVs and their ground stations rely on our DDS-compliant Connext product family for their mission-critical data. With this industry-first certification, RTI continues its leadership in the A&D space and in working with safety-critical systems.”