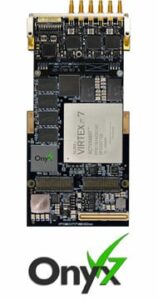 GateXpress PCIe Configuration Manager
GateXpress is a sophisticated FPGA-PCIe hardware engine for managing the reconfiguration of the FPGA, representing a major enhancement in the Onyx architecture. At power up, the GateXpress manager immediately presents a PCIe target to the host computer for discovery and enumeration, giving the FPGA time to load from FLASH. This is especially important for larger FPGAs where the loading time can exceed the PCIe discovery window, typically 100 ms on most PCs.

The bitstream configuration FLASH can hold four different FPGA images, selectable at boot up with hardware switches. Once booted, the GateXpress manager offers three options for dynamically reconfiguring the FPGA with a new IP image. The first option is to load a different image from FLASH through a software reload command.

The third option, typically used during development, allows the user to directly load the FPGA through JTAG using Xilinx iMPACT.

In all three FPGA image loading scenarios, the GateXpress configuration manager handles the hardware negotiation, simplifying and streamlining the loading task. In addition, the GateXpress manager preserves the PCIe configuration space during loading. This eliminates the need for rebooting the host computer for re-discovery because the host simply continues to see the board with the expected device ID. Thus, GateXpress allows dynamic FPGA reconfiguration though software commands as part of the runtime application.

“The unique GateXpress PCIe configuration manager circuitry is something we have been developing and testing for some time,” said Rodger Hosking, vice president of Pentek. “It’s a huge advantage to the end-user. Now a complete FPGA image can be dynamically downloaded while the system is in operation because the PCIe configuration handshake is automatically preserved. This is useful during development and also in deployed operational modes. It also eliminates the need for storing sensitive IP images in non-volatile memory.” Hosking added that GateXpress will be installed in all current and future Onyx products released throughout the next year.

Boosting Performance, Retaining Architecture
The Onyx Model 71720 shares many of the same architectural and front-end characteristics as the Cobalt Model 71620 data acquisition module. The similarity of the two families gives developers the opportunity to port software developed for Cobalt modules to the corresponding Onyx modules with a minimum of effort. All ReadyFlow board support libraries work with both families, further simplifying the software development effort. Thus, developers will be able to migrate from Cobalt to Onyx modules as their performance needs increase.

Architectural enhancements in the Onyx family include a doubling of the DDR3 memory in both size and speed to 4 GB and 1600 MHz, respectively. The PCIe interface has been upgraded to Gen 3, delivering peak transfer rates up to 8 GB/sec. The Model 71720 comes preconfigured with a suite of built-in functions for data capture, synchronization, time tagging and formatting, making the board an ideal turn-key interface for radar, communications or general data acquisition applications.

Form Factors and Software Support
The Model 71720 XMC module is designed for both air-cooled and conduction-cooled operating environments. It is available on carriers for 3U / 6U CompactPCI (Model 73720 / Model 72720), 3U VPX (Model 53720) and PCIe (Model 78720). Software support packages are available for Linux, Windows, and VxWorks operating systems. For systems that require custom functions, IP can be developed using the Pentek GateFlow FPGA Design Kit, extending or even replacing the factory-installed functions.