Chengyu Cao sees a day in the not-so-distant future when intelligent robots will be working alongside humans on a wide range of important tasks from advancing science, to performing deep sea rescues, to monitoring our natural habitats.

It’s a bold leap from the pre-programmed factory robots and remote-controlled drones we are most familiar with today. Cao, an assistant professor of mechanical engineering, and his research team are creating a new generation of smart machines – devices that are fully autonomous and capable of navigating their way through our complex world unassisted. These machines will not only be able to travel untethered from one point to another in space and perform tasks; they will be able to “think” on their own using artificial intelligence to adjust to unforeseen obstacles and situations in their environment – a tree, a building, a sudden gust of wind or change in tidal current – without human interface.

“Many of the unmanned vehicles in use today are piloted via remote control and require a lot of support staff and supporting equipment to work properly,” says Cao. “Our research is intended to make autonomous unmanned systems reliable, safe, and adaptive to a wide range of environments and situations.” 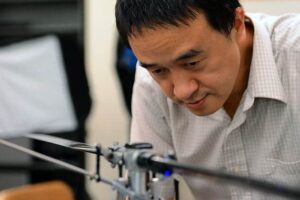 The research team is developing novel algorithms and sensor networks that will allow these individual robotic machines to navigate their environment unassisted. They also are developing complex control systems that will allow groups of the machines to work together cooperatively without failing or crashing into one another. In one example, Cao envisioned three or four unmanned autonomous helicopters working in tandem to lift and carry a very large object without dropping it and with the ability to maintain level flight and direction as a single unit.

“Our work is inspired by nature,” says Cao. “If you look at nature, you see fish schooling, birds flocking, insects swarming. By staying together as a group, it increases the coverage area and increases the survivability of every individual.”

Cao’s team has acquired a high-end, remote-controlled Maxi Joker 3 helicopter that will be modified so it can be used to test the new control system designs.

The team has received clearance from the Federal Aviation Administration to fly the copter up to 400 feet in a remote, isolated area off Horsebarn Hill at the University’s main campus in Storrs. The team has also built a prototype underwater submersible (called Proteus, after one of Poseidon’s sons known for adaptability) with which to test its novel control systems in aquatic environments.
.
The UConn research has captured the attention of the National Science Foundation’s National Robotics Initiative (NRI). In September 2012, the NRI awarded Cao’s research team a four-year, $1.2 million grant to develop a cooperative underwater robotic network that could be used to enhance underwater discovery and rescue. Cao is the principal investigator on the project. Kazem Kazerounian, dean of the School of Engineering, whose background is in robotics and design optimization; and Jun-Hong (June) Cui, an associate professor of computer science and specialist in underwater communication networks, are co-principal investigators.

“The primary purpose of this … initiative is to provide U.S. leadership in science and engineering research and education aimed at the development of the next generation of robotics,” Farnam Jahanian, the NSF’s assistant director for the Computer and Information Science and Engineering Directorate, said last year when the agency announced the NRI initiative to promote novel robotic systems. NASA has been pursuing advanced robotic technologies for more than a decade.

UConn’s project is a prime example of the kind of collaborative research initiatives that the NRI is interested in funding. Cao’s research team is a diverse group, with representatives from the electrical engineering, computer science, and mechanical engineering departments all pitching in.

“We want to have robust and adaptive vehicles that can handle all types of situations and uncertainties,” says Cao. “Our ultimate goal is to have a vehicle like a helicopter that will work in very complex environments such as urban areas with multiple large buildings, or a submersible that can traverse a complex ocean floor. That is currently a challenge to an autonomous system.”

UConn’s Igor Parsadanov, a trained remote control pilot, is assisting the research team with design and trial applications. He sees great advantages in creating autonomous vehicles that can perform dangerous tasks like deep sea rescue, wilderness firefighting, and underwater exploration without the need for human life support systems or the risk of casualties.

“These vehicles use global positioning systems, cameras, advanced sensors, and light detecting and ranging (LIDAR) technology to navigate through their environment,” Parsadanov says. “In this way, the system allows the vehicle to adjust its course by itself. I don’t think it will be too much longer before people are going to start trusting a vehicle they see operating without a person controlling it.”