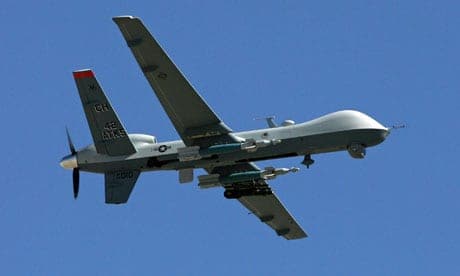 The UK is to double the number of armed RAF “drones” flying combat and surveillance operations in Afghanistan and, for the first time, the aircraft will be controlled from terminals and screens in Britain.

In the new squadron of unmanned aerial vehicles (UAVs), five Reaper drones will be sent to Afghanistan, the Guardian can reveal. It is expected they will begin operations within six weeks.

Pilots based at RAF Waddington in Lincolnshire will fly the recently bought American-made UAVs at a hi-tech hub built on the site in the past 18 months.

The UK’s existing five Reaper drones, which are used to target suspected insurgents in Helmand, have been operated from Creech air force base in Nevada because Britain has not had the capability to fly them from here.

After “standing up” the new XIII squadron in a ceremony this Friday, the UK will soon have 10 Reapers in Afghanistan. The government has yet to decide whether the aircraft will remain there after 2014, when all Nato combat operations are due to end.

“The new squadron will have three control terminals at RAF Waddington, and the five aircraft will be based in Afghanistan,” a spokesman confirmed. “We will continue to operate the other Reapers from Creech though, in time, we will wind down operations there and bring people back to the UK.”

The use of drones has become one of the most controversial features of military strategy in Afghanistan. The UK has been flying them almost non-stop since 2008.

The CIA’s programme of “targeted” drone killings in Pakistan’s tribal area was last month condemned in a report by US academics. The attacks are politically counterproductive, kill large numbers of civilians and undermine respect for international law, according to the study by Stanford and New York universities’ law schools.

The most recent figures from the Ministry of Defence show that, by the end of September, the UK’s five Reapers in Afghanistan had flown 39,628 hours and fired 334 laser-guided Hellfire missiles and bombs at suspected insurgents.

While British troops on the ground have started to take a more back-seat role, the use of UAVs has increased over the past two years despite fears from human rights campaigners that civilians might have been killed or injured in some attacks.

The RAF bought the drones as an urgent operational requirement (UOR) specifically for Afghanistan, and the MoD confirmed that their purpose after 2014 was unclear. Under rules imposed by the EU and the Civil Aviation Authority, UAVs can be flown only in certain places in the UK, including around the Aberporth airfield in mid-Wales.

If the air-exclusion zone restrictions are not lifted by the end of 2014, the UK may have to relocate the drones to the US, or perhaps even to Kenya, sources said.

“No decisions have been made about the longer-term future of Reaper as a core capability, nor have any decisions been made on the basing of Reaper aircraft once the UOR is complete,” said a spokesman. “The UK has a need for a persistent intelligence-gathering capability. Our investment and experiences with Reaper will be considered in developing the programme … at this stage, the MoD is still developing this strategy.”

The MoD said the relocation of RAF personnel from 39 Squadron at Creech air force base would begin in the new year, and that RAF Waddington would eventually be home to two squadrons of drones.

“The intention is to phase the relocation of 39 Squadron to ensure there is no disruption to Reaper support to current operations,” the spokesman added.

In the first three-and-a-half years of using the Reapers in Afghanistan, the aircraft flew 23,400 hours and fired 176 missiles. But those figures have almost doubled in the past 15 months as Nato seeks to weaken the Taliban ahead of withdrawal.

The MoD insists only four Afghan civilians have been killed in its strikes since 2008 and says it does everything it can to minimise civilian casualties, including aborting missions at the last moment.

However, it also says it has no idea how many insurgents have died because of the “immense difficulty and risks” of verifying who has been hit.

The MoD says it relies on Afghans making official complaints at military bases if their friends or relatives have been wrongly killed – a system campaigners say is flawed and unreliable.

Heather Barr, a lawyer for Human Rights Watch, has said: “There are many disincentives for people to make reports.

“Some of these areas are incredibly isolated, and people may have to walk for days to find someone to report a complaint. For some, there will be a certain sense of futility in doing so anyway. There is no uniform system for making a complaint and no uniform system for giving compensation. This may not encourage them to walk several days to speak to someone who may not do anything about it.”

In December 2010, David Cameron claimed that 124 insurgents had been killed in UK drone strikes. But defence officials said they had no idea where the prime minister got the figure and denied it was from the MoD.

A high court hearing on Tuesday may shed light on any support the UK is giving to the CIA’s campaign of drone strikes in Pakistan. The case has been brought by Noor Khan, whose father was killed in an attack on a local council meeting in 2011. He is asking the foreign secretary, William Hague, to clarify the government’s position on sharing intelligence for use in CIA strikes, and is challenging the lawfulness of such activities.

His lawyer, Rosa Curling, said: “This case is about the legality of the UK government providing ‘locational intelligence’ to the US for use in drone strikes in Pakistan.

An off-the-record GCHQ source stated to a number of media outlets that GCHQ assistance was being provided to the US for use in drone attacks and this assistance was ‘in accordance with the law.’

“We have advised our client that this is incorrect. The secretary of state has misunderstood the law on this extremely important issue and a declaration from the court confirming the correct legal position is required as a matter of priority.”