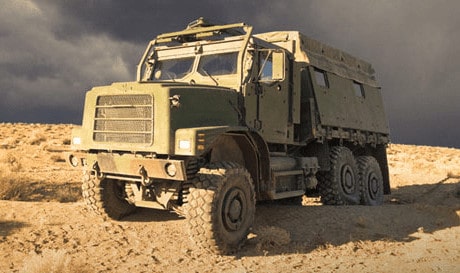 The Oshkosh TerraMax UGV technology was fitted to two MTVRs

Oshkosh Defense, a division of Oshkosh Corporation, recently demonstrated its TerraMax unmanned ground vehicle (UGV) technology for Brig. Gen. Mark Wise, commanding general of the Marine Corps Warfighting Laboratory (MCWL), and others at an event in Pennsylvania. Representatives from MCWL, the Office of the Secretary of Defense, the Department of Transportation, the Robotic Systems Joint Project Office and other agencies were also in attendance.

The Oshkosh TerraMax UGV technology is designed as a scalable kit that can be tightly integrated on current production vehicles, including those built by other manufacturers, or retrofitted on legacy vehicles. Vehicles equipped with the TerraMax UGV technology are able to complete planned missions in full autonomous mode or by “shadowing” a leader vehicle. They can also maintain prescribed convoy following distance, function in all weather conditions and operating environments, retain their original payload and performance capabilities, and require minimal human interaction or operator training.

Oshkosh will be demonstrating the TerraMax UGV technology at AUSA 2012 at booth #1713, and company executives will be on hand to discuss it.