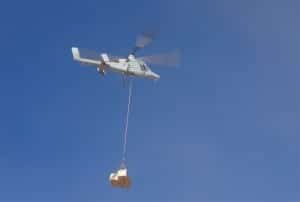 ONR is initially providing $28 million to the industry-led teams to develop prototype concepts in the Autonomous Aerial Cargo Utility System (AACUS) program. The system would support Navy and Marine Corps units under hostile conditions and could be operated by any warfighter on the ground with a smartphone-like device.

“AACUS responds to warfighter needs derived from our experiences in Iraq and Afghanistan,” said Mike Deitchman, who heads ONR’s Naval Air Warfare and Weapons Department. “We are trying to develop an autonomous system to deliver supplies to the battlefront more quickly-and to get our vehicle convoys off dangerous roads, where they’re much more vulnerable to attack.”

AACUS, an ONR Innovative Naval Prototype, will produce artificial intelligence and autonomous sensing and perception technologies, including threat- and obstacle-detection and avoidance systems and automatic landing capabilities. The system is designed to allow robotic helicopters to take off, fly and deliver supplies on their own without a human robotics expert physically controlling them.

Ultimately, these technologies could transition not just to unmanned vertical takeoff and landing aircraft, but also to manned rotorcraft that currently experience problems with landing in brown-out conditions.

The initiative is part of a five-year, $98 million effort to develop sensors and control technologies for robotic rotorcraft. Naval forces will one day use a mobile application to summon the autonomous unmanned rotorcraft to deliver combat supplies.

The two teams will commence work this fall to demonstrate their autonomous systems in early 2014. Program officials expect to see beyond line-of-sight operation as well as operations in a GPS-denied environment.

Along with industry partners, ONR has teamed with NASA’s Jet Propulsion Laboratory and the U.S. Army Aviation and Missile Research Development and Engineering Center to realize the project’s full potential.

“The goal is to get to a first flight demonstration in 18 months in a realistic setting at a test range with obstacles present,” said Dr. Mary “Missy” Cummings, program officer. “It’s a fly-off to see who can do the best.”

“The science and technology developed will be a huge leap in autonomous aircraft capabilities and human-machine interaction,” said Cummings.

ONR provides the science and technology necessary to maintain the Navy and Marine Corps’ technological advantage. Through its affiliates, ONR is a leader in science and technology with engagement in 50 states, 70 countries, 1,035 institutions of higher learning and 914 industry partners. ONR employs approximately 1,400 people, comprising uniformed, civilian and contract personnel, with additional employees at the Naval Research Lab in Washington, D.C.