Premature failure of pilot valves in shipboard firefighting systems was a major issue for the U.S. Navy, prompting it to commission Marotta Controls, in Montville, N.J., to develop a solution through seawater-contaminant-tolerant motor-operated pilot valves (MOPVs) whose reliability has been shown to be an order of magnitude greater.

A four-port master MOPV developed by Marotta Controls will be used to initiate aqueous film forming foam (AFFF) concentrate flow and fire-main flow for mixing and disbursement to AFFF systems aboard the Navy fleet. The three-port MOPV will serve as the local disbursement valve for either fire-main flow or the AFFF mixture.

In addition to passing standard stringent naval requirements for shock, vibration, spray-tightness and electromagnetic interference, the MOPV also passed extended cycling tests and stagnant water exposure tests that required zero leakage after cycling and exposure to seawater filled with contaminants such as salt, sand and grit. The new MOPV proved to be leak-tight over thousands of cycles with the seawater line fluid. 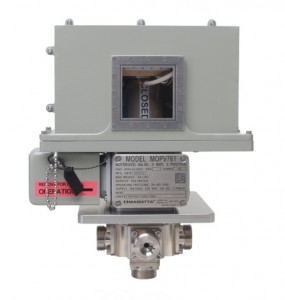 “We developed the MOPV in response to the evolving critical needs of our customers,” said Michael Leahan, senior vice president of business development and chief sales officer of Marotta Controls. “The modernized MOPV design uses advanced materials and electronics to increase robustness and reliability, providing the U.S. Navy with a cost-effective system that reduces weight, life-cycle maintenance and corrosion sensitivity.”

The Navy’s performance target was five years, or 1,000 operational cycles. Marotta Controls ended up achieving 5,000 cycles, corresponding to a 25-year service life upon which the valve seat surface needs to be replaced. Typically a naval ship remains in service for 40 to 50 years.

The materials of construction employed in the valve are all about contamination resistance and saltwater tolerance, according to Marotta Controls’ chief technology officer, Steve Fox. A copper-nickel alloy was selected for the valve housing, a nickel-aluminum-bronze alloy for the poppet material and a fluoropolymer (Teflon) for the spring-loaded seat material.

“This combination allows the valve to seal when it needs to seal and open when it needs to open,” says Fox. Furthermore, the interaction between the poppet and valve seat also generates a self-cleaning action that expels contaminants such as sand without damage to the poppet.

The Navy also required cost reductions, and Marotta Controls met that need through a combination of specialized tooling and fixtures for manufacture, assembly and testing that also enabled a high degree of automation, and a design that featured an integrated cover and base. “Assembly and testing are carried out in-line on a series of stations,” Fox says. “Testing such as for proof pressure, leakage checks, flow checks, and electrical checks such as dielectric and withstanding voltages are carried out automatically and analyzed using a LabView system.”

Marotta Controls also made advances on the electronics side for the valve. Rather than relying on relays, the company opted for solid-state transistors to communicate with the ship’s control system. The electronics also conform to the Department of Defense 461 Standard for electromagnetic interference.

The space restraints imposed on the valve package were also strict. “The valve had to fit various ship classes, and we were given a three-dimensional envelope that we had to comply with,” says Fox. “For a four-way valve, we were able to come up with a very compact design.”

Marotta Controls has been testing the valves since last November using stagnant seawater. The valves are activated once per month and verified for actuation and absence of leaks for all ports under pressure. Qualification testing has been completed, and the MOPVs are now moving into the initial production phase.

The MOPV features a visual and electrical position indicator; solid-state controls on a single, replaceable circuit board; low-cost maintenance and logistics; the ability to operate in any physical orientation; a modular design; manual override; and availablity in two-, three-, and four-way options. Responding to control signals, the motorized actuator opens and closes the valve by turning a rotor within the valve body. The rotor, which contains the valve’s fluid control passages, rotates 90 degrees to open or close. In the event of a signal or power loss, the rotor is easily actuated manually by an integrated hand crank.

This MOPV remains leak-tight in seawater containing contaminants through the use of spring-loaded Teflon seats, which remain pressed against the outside diameter of the rotor at all times. The MOPV also uses a modular design that enables easy maintenance, both aboard the ship and in depot. Each module can be easily replaced aboard the ship without disturbing the remaining assemblies.