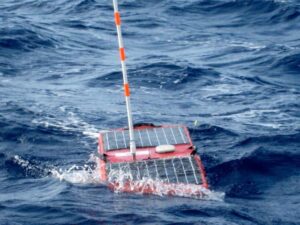 Liquid Robotics®, an ocean data service provider and developer of the Wave Glider®, the first wave powered autonomous marine robot, reports that one of its Wave Gliders located in the Gulf of Mexico collecting ocean chemistry data stared down Hurricane Isaac. Located in Isaac’s path, G2, a Wave Glider performing scientific missions, was moving out of the projected path when Isaac changed its mind and headed directly for the rugged robot.

As the eye passed 60 miles east of the Wave Glider, its pilots watched as all the other vessels in its area raced out of the Gulf of Mexico. Heavily outfitted with sensors to measure water temperature, wind speeds, barometric pressure and air temperature, G2 remained in the area and lived up to its name providing new insights into the hurricane. Time-lapsed maps showed a dramatic drop in water temperature, suggesting that Isaac was vacuuming the heat from the Gulf. Sustained winds of 40 knots with gusts up to 74 knots and barometric pressure falling to 988.3 mbar demonstrate the storm’s intensity.

“I grew up in Louisiana, so I have many friends and family affected by Isaac. I have first hand experience with the serious impact of powerful storms like this since I lost family members to storms like Camille,” said Bill Vass, CEO of Liquid Robotics. “Our thoughts go out to all those who have been affected by Hurricane Isaac. We are proud to see our Wave Glider not only survive the Category I hurricane, but also continue to communicate valuable real-time weather data as it battled 74 knot winds. Hopefully, autonomous platforms like the Wave Glider will make it possible to better predict the severity and risk to everyone in the Gulf Coast area in the future.”

Meanwhile east of Isaac, off the coast of Puerto Rico, another Liquid Robotics Wave Glider, Alex, was launched to support a new joint project to measure hurricane intensity. Working in coordination with the NOAA Atlantic Oceanographic and Meteorological Laboratory (AOML), this brave marine robot is patrolling for the next hurricane and for a chance to be the first to measure the conditions both above and below the surface of the ocean that are needed to predict hurricane strengthening. Funded by Liquid Robotics, this project promises to provide data never before available to scientists for better hurricane prediction.