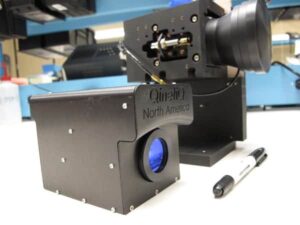 The demonstration was conducted to verify the sMSI’s ability to discriminate and identify various targets from specific altitudes, and to assess the custom 55 millimeter optical system’s performance. Test altitudes were 400, 1,200 and 3,000 feet, consistent with mission altitudes for small UAVs. One sMSI with a normal field of view and one sMSI with a wide field of view were flown simultaneously, along with a standard electro-optical camera for comparison. Three real-time multi-spectral processing modes were used to determine which modes work best for each type of target. The team’s next step will be to conduct new flight tests with the sMSI integrated onto UAVs to prepare for real-world mission support.

QNA’s sMSI is a compact, lightweight, low power camera that supports a variety of applications, such as improvised explosive device detection, camouflage detection and oceanographic/environmental sensing. The sMSI is the latest innovation in QNA’s long history of developing and integrating MSI cameras onto a variety of platforms and systems.