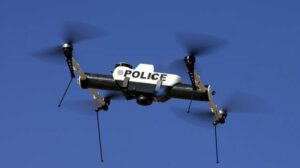 Faced with a skeptical public uneasy about the potential impact of drones on personal privacy, three leading law enforcement groups on Friday endorsed industry-backed guidelines limiting the use of unmanned aerial vehicles (UAVs).

It’s the latest move in the drone sector’s ongoing fight against the popular concern that the aircraft represent a new sort of “Big Brother,” capable of looking through windows and flying undetected above American neighborhoods. Police and other law enforcement agencies, already using UAVs on a limited basis, are pushing back hard against that perception.

The Airborne Law Enforcement Association, the FBI Law Enforcement Executive Development Association and the FBI National Academy Associates on Friday joined the International Association of Chiefs of Police in supporting new rules designed to keep police and other agencies from abusing the new powers and capabilities that come with drones, which are now used only by government entities, but will be available for personal and commercial use beginning in 2015.

The guidelines call for law enforcement personnel to “secure a search warrant prior to conducting the flight” if a drone could possibly infringe upon “reasonable expectations of privacy.” The rules also say that any images collected by an unmanned vehicle will not be kept unless they are “evidence of a crime” or part of an ongoing investigation.

Unless the photos or videos obtained by UAVs are exempted by law, they should be available for public inspection, the policy states.

The drone sector’s leading trade group, the Association for Unmanned Vehicle Systems International (AUVSI), has come out in favor of such privacy protections. Earlier this summer, the organization released its own voluntary “code of conduct” for all who design, test and operate unmanned vehicles.

“Unmanned aircraft help law enforcement agencies with missions, such as search and rescue, crime-scene photography and other dangerous or difficult tasks, often at a lower cost than manned aircraft,” AUVSI President and CEO Michael Toscano said in a statement.

The law enforcement guidelines “exemplify the community’s commitment to use this technology responsibly and with respect to the individual rights we all cherish,” he said.
Recent polling found that the public is supportive of drones in some law enforcement capacities, but skeptical about others. A June survey by Monmouth University found that 80 percent of Americans support UAVs as part of search-and-rescue missions. More than two-thirds support using drones to track down runaway criminals, and 64 percent think they should be employed at U.S. borders to stop the flow of illegal immigrants.

But Americans have a far different view when it comes to routine police activity. More than two-thirds oppose the use of drones to issue speeding tickets. Only 23 percent support that idea.