Pentagon to Make UAVs Commercially Available to Outside Nations 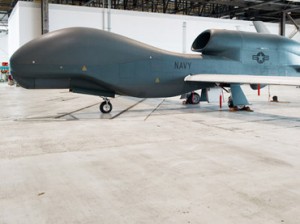 One of several the US Navy's Northrop Grumman MQ04C Broad Area Maritime Surveillance(BAMS) Unmanned Aircraft Systems(UAS) is seen in a hangar July 31, 2012 at Naval Air Station Patuxent River, Maryland. This is the US Navy's version of the US Air Force's RQ-4B Global Hawk and is a forward deployed, land-based, autonomously operated system that is 47.6 feet (14.5 meters) long, a wingspan of 130.9 feet (39.9 meters) with unrefuled flight times up to 27 hours and 8,200 nautical miles(15,186.4 kilometers) and at altitudes upto 60,000 feet(18,288 meters). AFP Photo/Paul J. Richards

The use of drones might be raising questions within the United States, but overseas the demand is mounting. The US Defense Departments says they are preparing to make unmanned aerial vehicles commercially available to 66 outside nations.

If approved by Congress and the US State Department, the Pentagon could soon be peddling the remote-controlled war machines that have become a hallmark of America’s overseas wars to dozens of its allies. It’s a not deal that’s likely to be cut without a sound, however, as the use of UAVs has become one of the most debated issues regarding the US military at home.

Last year, however, the DoD put together a list of 66 countries they hope they will be cleared to sell drones too, and today the Defense Department says they are just as eager as ever to get the ball rolling.

Countless watchdog groups have condemned the use of drones, calling the aircraft responsible for the deaths of hundreds of innocent civilians. As recently as this past weekend, a US-led drone strike in Yemen was reported to cause fatalities for no fewer than 13 civilians. Even so, adding UAVs to the wish-lists of other countries could be a consideration favored by much of Washington, especially those who have feared than planned budget cuts will nix billions from the Pentagon’s budget over the next decade.

Last year, US weapons exports amounted $66.3 billion worth of deals thanks to sales to the States’ allies, the largest figure ever to come through arms sales. Just last month, a Congressional Research Service report claimed that 2011 was “the highest single year agreements total in the history of the US arms export program,” and that trend could very well carry over, especially if UAVs are added to the list of inventory available to the allies.

To Reuters on Wednesday, Northrop Grumman Corp CEO Wes Bush says that the Obama White House is working to make it easier for his company and others to deal drones as part of their international arms exchange, but roadblocks remain in place, regardless.

“I wish we were further along in getting that done. It’s slow, it’s painful, but we’re doing the right things to move in that direction,” Bush tells Reuters.

Earlier this year, the Pentagon’s Defense Security Cooperation Agency deputy director, Richard Genaille, told attendees at the ComDef 2012 conference, “We don’t really have a comprehensive U.S. government policy” on drone exports, but one was indeed in the works.

“It hasn’t moved quite as fast as we would like, but we’re not giving up,” Genaille said.

In May, Turkish President Abdullah Gul told the state-run Anadolu Agency that the White House has expressed a “positive stance” over the sale of UAVs, and “They are trying to convince the Congress” before an agreement is made.

Last month, the US-based marketing firm Teal Group estimated that “UAV spending will almost double over the next decade from current worldwide UAV expenditures of $6.6 billion annually to $11.4 billion, totaling just over $89 billion in the next ten years.”