Northrop Grumman to Highlight International Capabilities in UAS at ILA 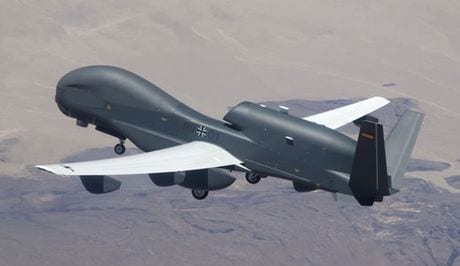 Northrop Grumman Corporation is participating in the ILA Berlin Air Show, where it will highlight its industry-leading intelligence, surveillance, and reconnaissance (ISR) capabilities with the EURO HAWK and NATO Alliance Ground Surveillance (AGS) platforms, both of which are international derivatives of the RQ-4 Global Hawk high-altitude long-endurance (HALE) unmanned aircraft system (UAS). The company’s aircraft navigation and stabilisation sensor technology will also be featured.

The air show will take place Sept. 11-16 at the Berlin ExpoCentre Airport directly adjacent to BER Berlin Brandenburg International, the capital’s future airport. More than 1,100 exhibitors from 40 countries are expected to attend. The Northrop Grumman pavilion No. 645 and exhibit area are at the west end of the exhibition site. A full-scale model, configured in EURO HAWK® and NATO AGS livery on alternate days, will be on display in front of the company’s pavilion.

“Northrop Grumman’s unrivalled experience in advanced UAS, delivering more than 100,000 unmanned systems to military customers in the U.S. and around the world for nearly 70 years, gives us a strong foundation to produce some of the most capable and reliable unmanned surveillance systems anywhere,” said Janis Pamiljans, sector vice president and general manager for Northrop Grumman’s unmanned systems business.

“The German Air Force’s EURO HAWK® and NATO’s AGS systems mark important milestones for us – they are the first international versions of the RQ-4 Global Hawk and the first HALE UASs to be used in Europe. We look forward to building on the success of this trans-Atlantic industrial cooperation and the strong partnerships that we have developed through both of these programmes.”

EURO HAWK is the first HALE signals intelligence (SIGINT) UAS based on the RQ-4 Global Hawk produced by Northrop Grumman for the German Bundeswehr. It made its first flight to Germany, touching down in Manching in July 2011, and is ready for SIGINT payload flight testing.

The EURO HAWK carries a new SIGINT mission system developed by EADS Deutschland GmbH, operating through Cassidian, the defence and security division of EADS, and integrated in Manching.

With a wingspan larger than most commercial airliners, endurance of 30 hours and a maximum altitude of more than 60,000 feet, EURO HAWK® is an interoperable, modular and cost-effective replacement for the fleet of manned Breguet Atlantic aircraft, which had been in service since 1972 and was retired in 2010.

Northrop Grumman is also the prime contractor for the NATO AGS system and will provide and initially maintain five Block 40 Global Hawk unmanned aircraft equipped with an advanced ground surveillance radar sensor – the Multi-Platform Radar Technology Insertion Programme (MP-RTIP), which is capable of detecting and tracking moving objects as well as providing radar imagery of target locations and stationary objects.

Demonstrating its commitment to trans-Atlantic cooperation, Northrop Grumman leads an industry team of European defence companies representing all 13 participating NATO nations to develop and produce an airborne ground surveillance core capability, which is missionized to NATO requirements and leverages national investments already made for the benefit of the entire alliance. The ground element of the programme will be wholly produced by European industry, offering the potential for national reuse in other programmes.

The NATO-owned and -operated AGS system is intended to support a broad range of missions, including protecting ground forces, border and maritime security, counter- and anti-terrorism, crisis management, peacekeeping and enforcement, and humanitarian assistance and disaster relief. Northrop Grumman signed the $1.7 billion (€1.2 billion) contract for the NATO AGS system at the NATO summit in Chicago in May this year.

The company’s German subsidiary, Northrop Grumman LITEF, will also be represented at the air show. On display in the Northrop Grumman pavilion will be sensors for weapon stabilisation, inertial guidance systems for missiles and Attitude Heading Reference System navigation systems for commercial fixed and rotary wing aircraft based on fibre optic and micro electro mechanical systems technology. Northrop Grumman LITEF systems are in service on aircraft platforms in the U.S., Europe and Asia and are fitted to the Eurofighter Typhoon and the Tornado as well as the Meteor, Taurus and IRIS-T missiles.