UK spent £2bn on developing military drones in the past five years and is poised to commit an extra £2bn, claims report. 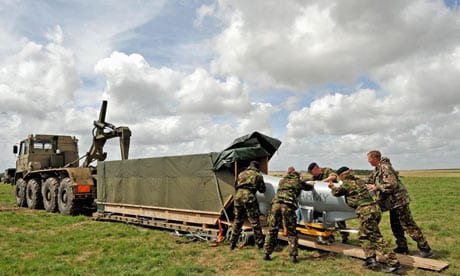 An UAV is loaded at Westdown Camp, Wiltshire: the study claims the use of drones raises moral and ethical questions

The UK has spent more than £2bn on buying and developing military drones over the past five years and is poised to commit an extra £2bn for another new unmanned aircraft, according to a report.

The figures show how the Ministry of Defence has poured money into buying and researching a variety of UAVs (unmanned aerial vehicles) as armed forces chiefs recognise their potential value in modern warfare.

However, the study by the campaign group Drone Wars UK warns that the extensive use of UAVs by the military and their likely employment in the civilian sphere raise moral and ethical questions that should be properly scrutinised and debated.

“United Nations experts, legal scholars and civil liberties campaigners are all expressing serious concerns about the rising use of unmanned drones,” said Chris Cole, the founder of Drone Wars UK and author of the report, which was published on Thursday. “At a time of tough spending cuts, it cannot be right that the UK is pouring billions of pounds into developing new drones without proper parliamentary scrutiny or debate of the serious legal and ethical issues surrounding the use of this technology.”

Cole wants the Commons defence select committee to hold an inquiry into the use of UAVs by the UK military, which has been flying armed drones in Afghanistan for four years. He believes other parliamentary committees also have responsibilities for oversight in this area, particularly if UAVs are to be used over Britain for civilian purposes.

The report states that 76 countries have UAVs, but only three – the UK, US and Israel – are using armed drones in military operations.

The UK bought six Reaper drones from the US military in October 2007 for use in Afghanistan, and it flies five of them from Creech Airforce base in Nevada – one crashed and was irreparable. By the end of this year, the UK will have its own separate squadron of five Reapers stationed in the UK at RAF Waddington, Lincolnshire, where a purpose-built headquarters is being constructed.

Pulling together details from parliamentary answers and MoD statements, the report says £500m has been spent on Reapers so far, and £847m committed to the Watchkeeper system, an advanced surveillance and targeting UAV that is being tested in restricted airspace at Parc Aberpoth in Wales.

The government has committed millions of pounds to researching new combat UAVs, including a £30m contract with the arms group BAE Systems for the Mantis and Taranis drone programme.

The report says the MoD is also expected to spend £2bn on an Anglo-French initiative, the Scavenger UAV, an armed aircraft with long endurance.

Cole said the £2bn figure for spending on UAVs could be an underestimate because of the “difficulty of obtaining up-to-date figures for government spending on developing new drone technology”.

He added: “There are a number of serious questions about the growing use of unmanned drones for military and civil use. Is the military use of unmanned drones lowering the political costs of military intervention? While manufacturers argue that drones can deliver their weapons with ‘pinpoint precision’, how accurate are these systems in reality? What are the privacy and civil liberties implications of using drones in civil airspace? How far should we allow the development of autonomous unmanned systems?

“All of these questions and more need to be debated openly and honestly, and require careful analysis of the available evidence.”An MoD spokesman said: “All MoD procurement is subject to tough scrutiny and is dictated by delivering what our armed forces require. The main contribution of remotely piloted air systems in Afghanistan is surveillance and reconnaissance, providing vital intelligence to protect our troops. A very small proportion of remotely piloted aircraft operations involve the use of weapons and only Reaper is armed. On the rare occasions where Reaper’s weapons are used, the same strict rules are followed that govern the use of weapons on manned aircraft.”Jim Murphy, the shadow defence secretary, said UAVs were “an important part of modern warfare”.

“We must use advanced technology to strengthen our national security, but we always have to be able to properly scrutinise expenditure,” he said.

The UK’s Reaper UAVs in Afghanistan flew 11,000 hours and fired more than 280 laser-guided Hellfire missiles and bombs at suspected insurgents in the year to May. The MoD says only four civilians have been killed in UK drone strikes, but human rights campaigners fear this is unreliable, because the military relies on Afghans making a formal complaint about a death.

In August, the Guardian revealed the MoD also wants to expand the number of maritime drones in operation in the hope they can be used for counter-piracy missions and potentially anti-submarine warfare.

Total funding for development and testing of UAVs – £1,031m