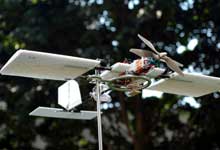 The research will provide insights for small UAVs

The Office of Naval Research (ONR) is looking at birds’ perceptual and maneuvering abilities as inspiration for small unmanned aerial vehicle (UAV) autonomy.

An ONR-funded, five-year Multidisciplinary University Research Initiative (MURI) program is examining the control and behavioral processes of birds and other small animals when flying at high speeds through complex environments, such as forests or urban settings. Researchers are trying to understand why birds make particular flight path choices and how they can do so quickly at higher speeds than would be safe for current engineered air systems in these environments.

The goal is to develop and successfully demonstrate a small aircraft that can navigate obstacles in very complex and unstructured surroundings, while maintaining speeds as fast as 5 meters per second. The theoretical results being developed may also be applicable to larger UAVs for particular tasks, such as landing at difficult, unprepared sites.

“Autonomous systems technology can be a great way to deliver increased capability to the Navy and Marine Corps at an affordable price,” said Marc Steinberg, a research program officer in ONR’s Science of Autonomy Program. “We can provide warfighters with a lot more flexibility and enable new mission performance, from flight under a forest canopy and in urban canyons to damage control applications onboard ships. Flying animals provide evidence it is possible to build compact platforms with limited sensing that can safely move through challenging environments.”

In the lab, researchers set up an artificial forest with tall pipes serving as trees at Harvard University’s Concord Field Station. Birds and a Massachusetts Institute of Technology (MIT)-built UAV are wired with small digital video cameras and motion-capture technology similar to that used in Hollywood. Both are studied in parallel to compare and learn from performance as the research progresses. A goal is to move to flight in a real forest by the program’s end.

The idea is not to copy the birds but to incorporate lessons about how they navigate and use dynamic obstacle avoidance methods into a system that can make real-time decisions that take into account its surroundings. For example, researchers already have discovered a theoretical speed at which the probability of a collision is high in forests with an average distribution of trees; if a UAV stays below that threshold, the probability of an accident lowers dramatically. The program also has begun to reveal the types of flight strategies used by birds in these environments.

“We want to build small-scale UAVs that can fly quickly through indoor and/or cluttered environments, but controlling these UAVs is very different than controlling a fighter jet flying up above the clouds,” said Dr. Russ Tedrake, X Consortium associate professor of electrical engineering and computer science and aeronautics and astronautics at MIT and the MURI lead. “To be successful, we have to solve a number of incredibly hard problems in computer vision and nonlinear control. This long-term project lets us focus on the basic research questions that will lead to fundamental results and, ultimately, dramatic new capabilities for UAVs.”

In addition to providing warfighters greater flexibility, small UAVs are more agile and easily transportable, and they’re less expensive. A program goal is to be able to do this type of flight with cheap, lightweight digital video cameras as the main sensors. This would eliminate the need for other sensors typically used, such as laser-based ones that add cost and weight, and the MURI is testing feasibility.

To see a video of the small UAVs in flight, go to: http://www.youtube.com/watch?v=voN9CCmzxYk.

A closely connected MURI with the University of Washington, Boston University, University of Maryland and University of North Carolina is examining similar issues with animals in the wild, including birds, bats and large insects such as hawk moths.

Source: The Office of Naval Research