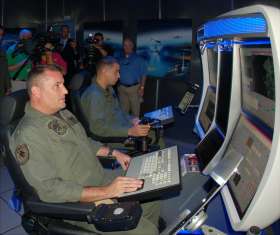 After two years of operational testing with squadrons assigned to HSMWL, the MQ-8B Fire Scout unmanned aerial vehicle (UAV) program is seeking to lock in its future with the Navy by providing a leading-edge simulator center.

Commander, HSMWL Capt. Doug Ten Hoopen said he was pleased to bring yet another training capability to NAS Jacksonville: “Our wing of Bravo and Romeo Seahawk helicopters is the only one in naval aviation to fly the Fire Scout. We began in 2010 with a 4th Fleet drug interdiction mission aboard the guided-missile frigate USS McInerney (FFG 8), where Fire Scout helped confiscate 60 kilos of cocaine from a fast boat.”

“As the Fire Scout UAV program evolves, it will be part of what we call ‘composite detachments’ that deploy with a manned MH-60R Seahawk and an unmanned Fire Scout.
“Also, with today’s shrinking budgets, this new center allows us to train squadron personnel without incurring the travel, food and lodging expenses to send them to NAS Patuxent River, Md. Today, we’re bridging the Fire Scout simulator capacity gap and improving the already robust training environment here at NAS Jax,” said Ten Hoopen.
He concluded, “For the past two years, operator and maintainer training has taken place here in temporary spaces among the H-60 Seahawk crews. In a few minutes, you’ll see the leading-edge design of our new permanent simulator facility.”

George Vardoulakis, vice president and program manager of tactical unmanned systems for Northrop Grumman Aerospace Systems, welcomed the military and civilian guests:
“Fire Scout complements the Navy’s manned helicopters by effectively extending the range and area of ship-based intelligence gathering operations. Its modular architecture accommodates a variety of electro-optical, infrared and communications payloads that provide ground- and ship-based commanders with high levels of situational awareness and precision targeting support,” he added. “The system has been in development for about 10 years and is particularly well suited to support littoral combat ship missions such as drug interdiction, anti-piracy, search and rescue, and reconnaissance operations.”

He said that today’s Navy is increasing its mix of manned and unmanned activities – and that this Fire Scout training facility will ensure operators are well schooled in executing its multi-mission capabilities.

According to a Northrop Grumman, the MQ-8B Fire Scout is an unmanned helicopter for U.S. Navy situational awareness and precision targeting. The unmanned aircraft is based on the Schweizer Model 333 two-seat manned helicopter. It can autonomously take off and land on any aviation-capable warship and at unprepared landing zones near battlefields.
Northrop Grumman has demonstrated MQ-8 Fire Scout radar capability to detect and track several targets with a Telephonics RDR-1700B radar system. The Fire Scout may eventually be armed with gun pods, Hydra 70-millimeter rocket pods and small missiles.
The MQ-8 Fire Scout is 30 feet long and 9.4 feet tall, with a rotor diameter of 27.5 feet. It can fly as fast as 125 knots and achieve altitudes of up to 20,000 feet.