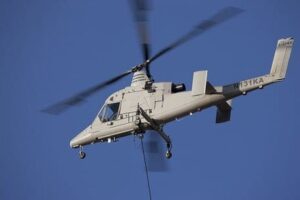 The KMAX helicopter was converted to a UAS

It takes the right elements to create a life-saving capability for the combat zone, as discovered after the first cargo resupply unmanned aerial system, or CRUAS, deployment made aviation history.

NAVAIR, the Marine Corps and industry partners found the right mix when they integrated a video game controller, rugged laptop and a KMAX K-2000 commercial, heavy-lift helicopter converted to a UAS, with a fast-track contracting and technical strategy. They then deployed a Marine detachment with Unmanned Aerial Vehicle Squadron (VMU) 1 to test the capability in Afghanistan from December 2011 through May 2012.

The result was a capability that exposes fewer warfighters to the risk of roadside improvised explosive devices (IEDs) and hostile fire.

“This is a great example of integration while fulfilling the ‘urgent needs’ of the warfighter,” said NAVAIR Commander Vice Adm. David Architzel as he opened the seventh Meet the Fleet post-deployment debrief here July 10. “Every time you can eliminate even a portion of a convoy, you eliminate the possibility of someone losing their life from an IED on the roads.”

The detachment’s two-fold mission was to fly routine, scheduled cargo UAS missions to build flight hours and gather reliability, and to support the needs of the Marine Corps by delivering cargo via an external sling load.

In the commercial world, the KMAX is used for firefighting, construction and lumbering. Built as a fully operational helicopter, it requires a start-up and shut-down pilot unlike other unmanned aerial systems, said Capt. Caleb Joiner, CRUAS mission commander.

The KMAX required less than two hours of maintenance per flight hour, which equates to a low cost, he said.

“Since it was an unmanned system, we were able to conduct flights during inclement weather when other helicopters couldn’t fly,” O’Connor said. “We flew during the night, in the rain, dust and some wind.” The KMAX handled up to 4,500 pounds of cargo per mission, he said.

Flying only during the night, two KMAX systems flew 485 sorties, or combat mission flights, for a total of 525 flight hours, Joiner said.

Most missions lasted about 1 hour and included a 20-minute turnaround time during which a pilot climbed into the helicopter to shut it down, refuel it, hook up the cargo and then start it back up. “That was a pretty short turnaround time, and allowed us to conduct six sorties per night. We could have done more,” Joiner said.

By the end of the deployment — and after receiving permission to hover — turnaround times with cargo hook-ups took 6 or 7 minutes to complete, Joiner said.

“The KMAX was very responsive, especially when compared to a convoy, a C-130 [Hercules] or an H-53 mission,” said Joiner. “Towing the KMAX out of the hangar to wheels-up, could take as little as 15 minutes.”

Deployment challenges included flight clearance approvals for changes to the original plan, safety zone restrictions associated with a UAS and the over-simplicity of the operator interface, O’Connor said.

The graphic user interface, or GUI, was designed for an untrained Marine to pick up and use, he said. “The challenge was that we had a simplified system with highly trained operators who could have handled a lot more control of the UAS,” O’Connor said. “However, we made a conscious decision to stick with the simplified system because we wanted to validate the concept as written.”

Other challenges included the size and weight of the UAS system containers, noisy generators that produced fumes and lack of a remote “kill switch” to turn the helicopter off, he said.

Developing a standardized platform with modular components for several types of missions would capitalize on the KMAX’s reliability, O’Connor said. For example, a camera payload would be added for an intelligence, surveillance and reconnaissance ( ISR) mission; the hook and long line added for cargo pick-up; missiles or rockets for a strike mission; or fuel pods for a long-range mission, he said.

“Considering budget issues, you would want one standard platform with standard logistics, supply, training and pipeline,” he said.

As a rapidly developing technology, the CRUAS’ results from its deployments with VMU-1 and VMU-2 will be analyzed to determine its future.

“The CRUAS IPT and the Marine Corps will review and analyze the after-action reports, feedback, data and theses from the Naval Post Graduate School as well as quantify the costs before making any recommendations,” said Capt. Patrick Smith, PMA-266 program manager.

The CRUAS IPT’s response to the Marine Corps’ urgent need to prove the viability of a cargo UAS and deploy the first cargo UAS within 11 months from contract award has won two accolades. The project’s speed and success earned the team an acquisition excellence award from the Office of the Secretary of the Navy in June 2012 and a Naval Air Warfare Center Aircraft Division Commander’s Innovation Award in December 2011.