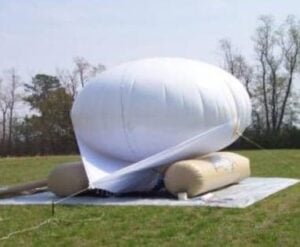 Carolina Unmanned Vehicles, Inc. (CUV)  has announced the delivery of a new version of their Lightweight Aerostat System (LAS) for the Small Tactical Multi-Payload Aerostat System (STMPAS). STMPAS combines the LAS hardware from CUV and payloads developed by Georgia Tech Research Institute (GTRI) for the Army Rapid Equipping Force (REF).CUV provided the aerostats and all ground operating equipment and GTRI developed the payloads. It will provide Intelligence, Surveillance, and Reconnaissance (ISR) capability for small tactical units in Afghanistan and other locations.

The REF mission is to rapidly increase mission capability while reducing risk to Soldiers and others by equipping operational commanders with off-the-shelf (government or commercial) solutions or near-term developmental items that can be researched, developed and acquired quickly.

The STMPAS consists of several optional ISR payloads attached under a small specially designed tethered blimp, called a Helikite, and a trailer Carrier that stores the Helikite and the required winch, sensors and helium tanks.

The STMPAS blimp can fly at 1000 feet for low cost, long term coverage for 24 hours a day for a week or more without maintenance or downtime. It operates for weeks at a time at a fraction of the cost of comparable aircraft or Unmanned Air Vehicles.

STMPAS has been tested by GTRI and the Army at Fort Huachuca, Arizona. One of the two STMPAS prototypes will be deployed to Afghanistan and one will be tested and evaluated in CONUS. The REF is procuring six more STMPAS for deployment to Afghanistan for further operational evaluation.

Helikites have lifting surfaces that generate aerodynamic lift to support the blimp in winds which would drive traditional designs into the ground. With the Helikite, LAS can be smaller and more mobile than traditional aerostat systems yet still operate in high winds. The STMPAS will be able to fly in 50 knot wind. With superior mobility, mission utility and adverse weather capability, LAS still requires only two people for all operations.

LAS is suitable for surveillance, communications relay and research for DOD and Homeland Security missions. Carolina Unmanned Vehicles has previously provided versions of LAS for the USAF, Sandia National Laboratory, and Lockheed Martin.