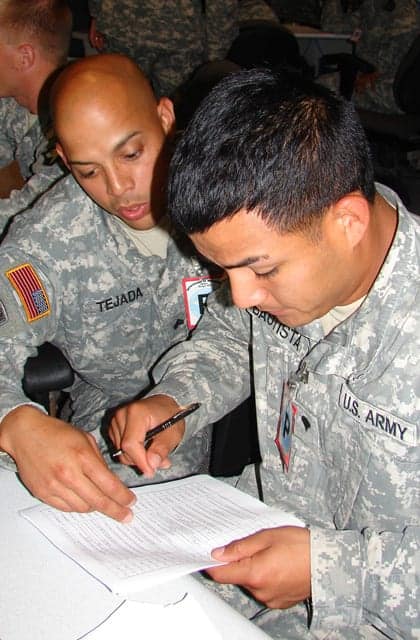 Soldiers of the 101st Combat Aviation Brigade participated in an Aviation Training Exercise at Fort Rucker, Ala., in June. The 101st CAB, the Army's first Full-Spectrum CAB, will deploy to Afghanistan in the fall.

When it’s time to go to war, the first step into theater for deploying combat aviation brigades is not on foreign soil. It’s at Fort Rucker, where the final phase of the brigade training takes place.

The Aviation Training Exercise is an intensive week-long event that brings about 300 members of a brigade team together in one location, and it serves as an important event for combat aviation brigade, or CAB, commanders, thanks to the simulations technology here, said Lt. Col. Craig Unrath, deputy director for the Directorate of Simulation.

“We bring together live, virtual, constructive and gaming into one venue that trains up through the brigade commander level. Very few places in the Army can really integrate all those elements. It’s all interactive, it’s completely integrated and it provides a training venue like nothing else,” Unrath said.

Training and Doctrine Command conducts this final certifying training event for deploying CABs at Fort Rucker on behalf of Forces Command because of the post’s tech-savvy ability to train the full spectrum of Aviation combat operations in an integrated training environment.

The Full-Spectrum CAB structure includes manned and unmanned Aviation systems, and is designed to be more flexible and capable across the full range of military operations.

For the 101st CAB commander, Col. Paul Bontrager, one of the major benefits of the exercise was the opportunity to have his Soldiers together as a focused audience prior to deployment.

“From January until about two weeks ago we were scattered across America between here, Colorado, California, Louisiana, and none of us were all together at one time in once place. This is the first time in five months I’ve had all my battalion commanders together at one time, and we’re able to focus and get ready,” Bontrager said.

For commanders, an important aspect of the training is the chance to rehearse the tactical operations center, or TOC, command and control prior to battle, Bontrager said.

“Primarily it’s the information flow within the brigade, to battalions and down to flight crews. This includes the simulations piece of it here where we actually have crews flying the missions, doing the tactics, talking back to the TOC. The whole information flow down to aircrews and back up is the primary piece of this,” Bontrager said.

Part of the exercise for the 101st included their helicopter pilots and Unmanned Aircraft Systems operators learning to communicate with each other as they work together on mission sets for the first time as a team, as UAS are now a brigade asset.

“When you listen to the mission on the radio, sometimes it’s difficult to tell if you’re listening to manned platform or unmanned platform because they’re tracking what’s going on, moving the sensor around looking at different things; it’s remarkably helpful. There’s some pretty significant benefits to having UAS integral to our brigade. It goes back to the human element, part of the team, part of the mission, part of the plan, so it will be value added when the mission actually occurs,” Bontrager said.

The pre-deployment exercise is overseen by a retired general officer who serves as senior mentor, includes controllers who critique and evaluate and brings in valuable current information from the battlefield, Unrath said.

“Subject matter experts that have been in theater with the unit the CAB is replacing come back here and watch over their shoulder, and give them tactics, techniques and procedures for how things are going in theater and how they need to be trained to do business,” Unrath said.