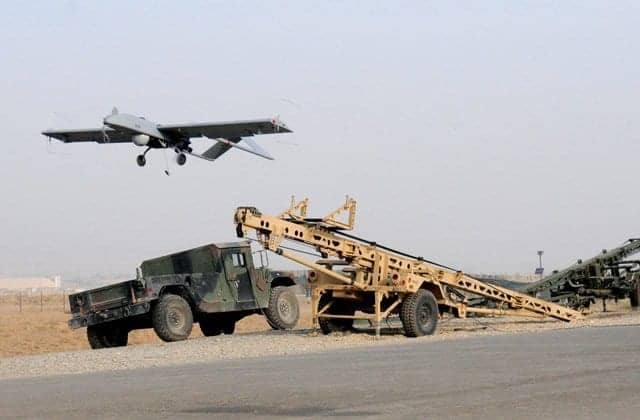 The Shadow UAS is used in Afghanistan

Serving as an Army Unmanned Aircraft Systems operator once meant providing video feed and hoping someone was looking at the computer screen besides you.

Because of a CAB redesign, UAS operators and helicopter pilots will now be better synched to support the ground commander’s mission and save lives, said Col. Paul Bontrager, 101st CAB commander, during the 101st CAB’s Aviation Training Exercise at Fort Rucker in June.

“It’s value added in having a UAS platform up, and Apache pilots and Kiowa pilots are both seeing benefits of utilizing UAS. When the operation is occurring the UAS operator has the understanding and the information needed for him to proactively use that asset. He’s not just a person waiting to be told what to do. He’s actually part of the mission now,” Bontrager said.

Organic UAS is one impact of the “full-spectrum” brigade re-design that makes the 101st CAB the Army’s first Full-Spectrum CAB.

The goal of Army UAS within the CAB is to give greater situational awareness and tactical flexibility to CAB and ground commanders, and UAS operators within the 101st CAB feel the structural difference already.

“We haven’t been integrating manned and unmanned systems before to this extent. We’re part of their team now and we can provide pilots another set of eyes,” said Sgt. Mark Lunday, UAS operator for Task Force Saber, 2nd Squadron, 17th Cavalry Regiment.

Part of that difference is the sharing of information and mission planning.

“Now we are going into briefs with the scout weapons team, getting the same information. We all know what’s going on, and we can go out with a mission set. They know how we work, we know how they work. We’re much more involved in what goes on,” said Spc. Tory Puetz, 2-17th UAS operator.

“It’s like another air team going out. Scouts use the UAS as another scout. Instead of having to hope a UAV is going to be there, or try to research where they will be, I can call and ask them to come to my location and help me right then. Before, that was out of our reach,” Wanaka said.

Apache and Kiowa pilots have the ability to receive a video feed from the UAS, send their feed to a ground unit, to a wing man and to each other, so that the ground commander and the pilots have a clearer picture of the battlefield.

“The ground commander can look at UAS feed or my own feed, and he can know. And I’m either wrong and he can correct me on the spot, or I’ve got what they’re looking for and there’s no questions about it,” Wanaka said.

“We’re there for everyone else. It’s why we fly,” Lunday said.

At the end of the day, it’s about saving lives.

“It makes the hair on the back of your neck stand up when you’re talking to this guy and you can’t get there soon enough. Now we can look at their video, so it’s going to increase the speed in which we can do things, react on things, so hopefully when you get there you can at least stop it. You don’t want to not be able to help that guy. If I can keep the ground forces coming back to the forward operating base every day, it’s a win,” Wanaka said.