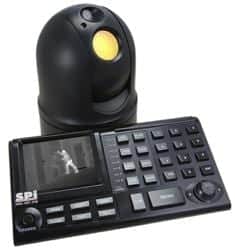 SPI Corp is a leading supplier and manufacturer of Thermal PTZ systems for civilian, law enforcement and military applications. Their industry focus on PTZ systems led to the development of the M1-D Thermal PTZ. Touted as a “lightweight, low cost EO/IR platform, it is being marketed to UAV / UAS manufacturers as a viable solution to meet the new FAA streamlined regulations.

“The M1-D Thermal PTZ is the result of over 10 years of experience in the thermal camera pan tilt market for SPI “. Stated Randall Kolchins, Director SPI CORP. “This system is everything we wanted it to be and is everything our customers ever dreamed it could be. The light weight and stunning imaging performance is combined with a low cost of entry making this the ideal solution for UAV manufacturers looking to take advantage of the new sub 25lb UAS regulations”.

Formerly called UAV’s (unmanned aerial vehicle) and now more typically referred to as a UAS (unmanned aircraft system) they are the “drone” systems that were borne out of military combat operations. These UAS devices can be either fixed wing (like an airplane) or rotary craft (like a helicopter) and can vary in size from smaller than a bird to as large as a passenger jet. Public safety agencies have long seen the value in having a UAS to assist in rescue and enforcement actions. By putting a Thermal PTZ on a UAS the agency can greatly extend its reach and effectiveness at a fraction of the cost of operation that traditional helicopters and personnel would incur. Unfortunately, the complicated FAA licensing procedures and high cost of acquisition have traditionally made the UAS unattainable to all but the military.

The latest FAA mandate seeks to change the civilian UAS landscape in the United States. Under the FAA 2012 reauthorization the agency has streamlined the process of licensing for public agencies. This first milestone includes important provisions for first responders. Specifically, the FAA has been directed to “allow a government public safety agency to operate unmanned aircraft weighing 4.4 pounds or less” within certain guidelines. The DOJ and FAA have an agreement that allows these agencies to then qualify to operate UAS vehicles up to 25lbs. SPI Corp believes that its M1-D thermal PTZ solution would be a viable low cost EO/IR solution for these entry level UAS platforms.

“Our M1-D thermal PTZ has a high resolution thermal sensor, daylight TV camera and laser pointer all in a pan tilt package with a total weight of only 2 pounds”. Commented Darren DeSoto Lead Technician, SPI CORP. “At only 2 pounds I can see the M1-D mounted on almost anything. I have run the M1-D on boats, cars and we have even put it on simple RC hobby aircraft with no problem”.

SPI claims that the M1-D thermal ptz is the ideal solution for Public Safety UAS solutions. They cite its low cost (reported to be up to 70% less expensive than previous thermal ptz models) and low weight of only 2 pounds as the major advantages of their platform. “In todays economy we cant afford to be frivolous with outrageously priced technology”. Exclaimed Mr. Kolchins. “Our country needs solutions that fit both the application and the budget. Our M1-D thermal ptz is just such a product. The size, weight and performance match the needs of Public Safety Agencies and the price is affordable enough for even the smallest of agencies. Now there is no excuse not to see in the dark!”