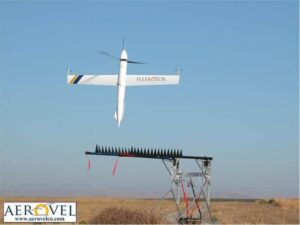 The Office of Naval Research is working on a long-range unmanned surveillance aircraft that can take off and land like a helicopter even in heavy seas and fit on vessels too small for larger drones.

The Flexrotor by Aerovel Corp. is still years away from being operational. But ONR and the craft’s developers hope it can provide autonomous intelligence, surveillance and reconnaissance coverage with less equipment and maintenance than its predecessors. So far, the project has received nearly $500,000 in ONR funding and developers are in the process of improving the transitions between vertical and cruise flight.

“Aircraft that can take off and land vertically and also have fast and efficient cruise flight are potentially useful platforms to operate from ships. They are also suited to operation from Marine Corps small-unit combat outposts,” said John Kinzer, an ONR program officer.

The prototype has better endurance and range than earlier UAVs, allowing imaging, magnetometry, data relays, weather analysis and reconnaissance to be done in real time, Aerovel President Tad McGeer said. Production models are expected in 2013 or 2014.

Eventually, the Flexrotor may use different technologies to maneuver between platforms.

The Navy and Aerovel also are playing up the Flexrotor’s use of an “automatic service platform” that does triple duty as a launchpad, recovery pad and maintenance station, removing the need for a catapult or snare required by drones with similar missions, such as Boeing’s ScanEagle.

“Flexrotor has a much smaller footprint for launch and recovery equipment compared to the ScanEagle,” Kinzer said. “This is always an issue for small ships, which … have very limited storage space.”

The Flexrotor is small enough to be carried without special equipment. Its wingspan is just less than 10 feet; it’s slightly more than 5 feet long and weighs 42 pounds. It can reach speeds as high as 90 mph but cruises at 50 mph. It can stay airborne more than 40 hours.

If the Flexrotor enters service, it would likely be operated by enlisted sailors who use it in conjunction with manned systems. The Navy has set a 55-pound threshold for unmanned aircraft, with the heavier, more advanced aircraft flown by pilots and naval flight officers.