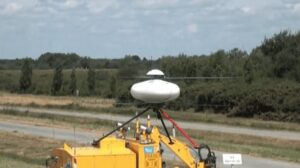 The IT180 vertical take-off and landing mini-drone made by INFOTRON has been chosen by Groupe INTRA (French economic interest group: EDF–CEA–AREVA) to extend its range of robotic devices to be used in crisis situations in the nuclear sector.

In case of a nuclear accident, this UAV can cover a wide variety of missions. These range from remote visual inspection of buildings more than 5 km away in a contaminated environment, to transport by helicopter of radiometric sensors in order to measure radiation levels and monitor their evolution over time. All these missions meant the preparation of highly selective specifications which only the IT180 drone could meet.

“It’s a great success for INFOTRON, resulting from close collaboration with Groupe INTRA over several years. The recent accident at the Fukushima nuclear power plant showed just how important it is to have a helicopter-type UAV that can be used in catastrophes like this.

This new reference in the nuclear safety domain has already triggered negotiations with other international players in this field, and should result in new orders in the coming months,” says Francis Duruflé, INFOTRON’s Director of Marketing and Sales.

“Thanks to its increased endurance and payload capacity, the fuel-powered version of the IT180 can be used for an even wider range of missions. The same architecture available in two different versions (electrical or fuel-powered) means that the user can either carry out a fast intervention on site or launch a long mission with the same payloads.

The complementary nature of the fuel-powered and electrical versions of the IT180 provides our customers with a wider range of intervention,” adds Christian Brunel, INFOTRON’s Technical Director.