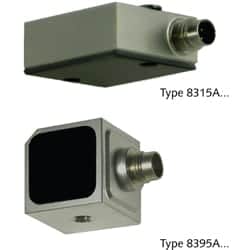 Typical aerospace GVT requirements call for the use of high-performance piezoelectric accelerometers which offer a lower per channel cost, yet which are also compact and lightweight enough to reduce the effects of mass loading on the article under test. These transducers also must offer accurate frequency and phase response within its specified frequency range. Due to the large number of accelerometers in use, requirements also call for the use of IEEE P1451.4 Transducer Electronic Data Sheet (TEDS) capabilities, which are compatible with TEDS-compliant signal conditioning and data acquisition systems that minimize transcription errors and record keeping tasks.

Type 8688A sensors feature an integral low-noise charge amplifier that converts the charge signal to a proportional high-level voltage signal. The Type 8688A triaxial accelerometers offer an industry standard 4-pin, ¼-28 connector, as well as several mounting accessories, facilitating easy installation into space confined areas, with ability to mount the sensor on any of its faces. Both single axis and triaxial models operate directly from the IEPE power source found in most FFT analyzers, Kistler Piezotron power supply couplers or any industry standard IEPE-compatible power source. Units are ground isolated when mounted with the optional twist-clip or adhesive adapter, says the company.