Last spring, GE broke ground on a $50 million aviation research center at the University of Dayton in Ohio. When finished next year, the center’s 200 engineers, technologists, and researchers will work on advanced electric power systems for next generation of unmanned aerial vehicles (UAVs), including classified UAVs as large as a fighter jet.

GE Aviation, which is spending another $17 million to upgrade other Dayton plants, is already a big player in the UAV market. For example, GE’s power systems work inside UAVs like the Global Hawk, and the X-45, and X-47 drone prototypes. “These UAVs and are the next generation of fighter and reconnaissance aircraft,” says Vic Bonneau, president of the Electrical Power Systems unit at GE Aviation. “At GE, we are being very aggressive at trying to invest in the kinds of technologies that will solve large problems for our customers 10 years from now.” 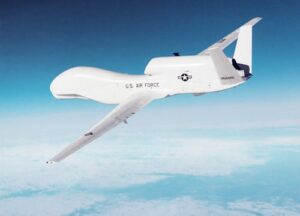 One such problem is heat. The Global Hawk, for example, has flown war reconnaissance missions in Iraq, Afghanistan and Libya, but also after Haiti’s devastating earthquake. More than half of the aircraft is built from lightweight, high-strength composite materials. But the composites, which are made from special resins, also make the inside of the UAV very hot. “They are like flying thermos bottles because of the composites,” Bonneau says.

Bonneau and his team solved the heat problem by building electronic systems from materials like silicon carbide, developed at GE Global Research, that can work at temperatures twice as high as the boiling point for water. The new Dayton R&D center will help Bonneau build sophisticated computer models that can simulate conditions inside the UAV and test new technologies. “We can try new things and try new ways to operate to use less fuel and be more efficient,” Bonneau says.

The use of UAVs is growing rapidly in both military and commercial aviation. Teal Group Corp. predicts that the $6.6 billion global UAV market will double over the next decade. Law enforcement may soon fly drones in domestic airspace, but they also find use in agriculture, traffic control, firefighting, scientific research, and during humanitarian missions.

But Bonneau says his research will reach beyond drones and “result in breakthroughs for the commercial space” as well. GE customers like Boeing, Airbus, Embraer or Gulfstream are already building composite airplanes. Says Bonneau: “They are facing the same kinds of challenges as the military.”