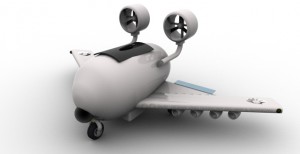 Their study, published in the journal Aircraft Engineering and Aerospace Technology, identifies a number of useful scenarios for future ceramic engine application, including a synergistic combination of the ceramic engine with a hybrid configuration of an airship and a flying wing called GUAV.

“GUAV is a proposed conceptual Unmanned Air Vehicle (UAV) designed to meet the aeronautical demands of the future,” Dr O. Gohardani explained to Sci-News.com. “The letter G stands for ‘Generic’ exhibiting the multi-purpose role of the vehicle. The G also coincides with the last name of the inventors namely, Gohardani.”

“The size of the GUAV can also be tailored according to desired flight missions, enabling the manufacturing of the aircraft in different sizes and number of propulsion units,” the researcher said. “Modern turbofan engines require high turbine inlet temperatures to achieve increased thermal efficiency and power output.”

“The complexity however is that internal engine components such as turbine blades would melt beyond the melting temperature of metal airfoils,” he explained. “Currently various techniques such as turbine blade cooling ensures that the hot gases are lowered to permissible reliable operation of the engine. With ceramic engines, the technical setbacks with melting points of metals disappear at the expense of ceramic brittleness.”

The GUAV is suggested for a maximum cruise speed of Mach 0.3 (about 102 meters per second) and will be operated at speeds below Mach 0.3, dependent on the specific mission requirements.

“GUAV is primary proposed for aeronautical applications,” Dr O. Gohardani said. “This UAV can on take multiple roles such as: traffic control, coast and border patrol, search and rescue operations, weather forecast, off-shore platform monitoring, and law enforcement missions. The expected operational year of the vehicle is 2020 or dependent on the acquired maturity level and technical readiness of various components involved.”

“GUAV is a hybrid airship designed with a distributed propulsion system, multi-fans and fan-in-wing features. The vehicle design enables a versatile operation of the vehicle based on energy efficiency and energy conservation. In an exemplary case, a coating of solar cells on the airship body, operates a number of smaller units onboard the aircraft.”

“UAVs have already established themselves as contenders for future aviation,” he continued. “The purpose of GUAV is partially to take one step closer to greener aviation and to provide an opportunity for utilizing UAVs with aims to serve a safer society while respecting citizen privacy.”

“GUAV is one stepping-stone towards greater ideas in aviation and the combination of multiple propulsion systems and various airframe combinations,” the experts concluded.