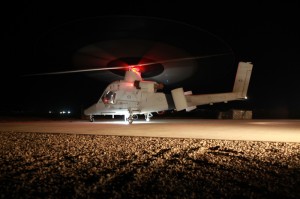 Two unmanned K-MAX helicopters have delivered more than one million pounds in less than four months in support of the U.S. Marine Corps in Afghanistan and will remain in theater until September on a deployment extension.

The aircraft, a joint effort by Lockheed Martin [NYSE: LMT] and Kaman Aerospace [NYSE: KAMN], is the first unmanned helicopter to deliver cargo and resupply troops in a combat zone. They have been keeping a steady pace of six missions per day, with record load deliveries ranging from a single 4,200-pound sling load to 28,800 pounds lifted in a single day. During operations in Afghanistan, previously scheduled to end in June, the aircraft has met or exceeded all expectations with less than one maintenance man-hour per flight hour. As a result, the Marine Corps has extended the K-MAX deployment through the end of the fiscal year, September 30.

“K-MAX has proven its value to us in-theater, enabling us to safely deliver cargo to forward areas,” said Marine Corps Maj. Kyle O’Connor, who is overseeing the deployment. “We are moving cargo without putting any Marines, soldiers or airmen at risk. If we had a fleet of these things flying 24-7, we could move cargo around and not put people in jeopardy.”

“The record lift and readiness numbers we’re seeing in-theater are a testament to the aircraft’s rugged design and its capability to reliably perform repetitive lift autonomously,” said Roger Il Grande, director of Airborne Systems for Lockheed Martin’s Mission System & Systems business. “The more deliveries the unmanned K-MAX makes, the more we remove the opposition’s ability to undermine our objectives with IED’s, and threaten the lives of our ground forces.”

The unmanned K-MAX has demonstrated its ability to carry and deliver 6,000 pounds of cargo at sea level and more than 4,000 pounds at 10,000 feet altitude. The aircraft can carry more cargo on its four-hook carousel to more locations in one flight than any other unmanned rotary wing platform. Its intermeshing rotors eliminate the need for a tail rotor and allow for significantly improved lift performance and lower maintenance costs.