Marine Unmanned Aerial Vehicle Squadron 2, the “Night Owls,” made history earlier this week when they completed the first “hot hookups” between landing support Marines on the ground and a hovering Kaman K1200, “K-MAX,” unmanned helicopter in Helmand province, Afghanistan, May 22. 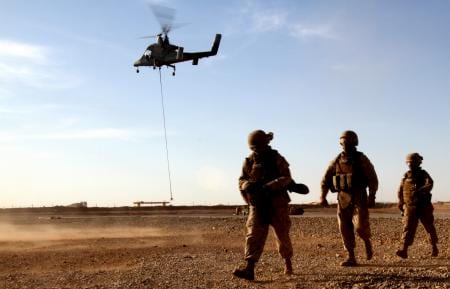 Marines with Combat Logistics Battalion 5 return from familiarizing themselves with the downward thrust of a Kaman K1200, or "K-MAX," unmanned helicopter during initial testing in Helmand province, Afghanistan, May 22. Marine Unmanned Aerial Vehicle Squadron 2 pioneered the first unmanned, mid-flight external cargo hookups, and delivered approximately 6,000 pounds of gear in their first day of testing.

In the nearly 20 years of its commercial and military use, no organization had ever attempted to hook cargo to the K-MAX while it was in unmanned flight.

“This was particularly important because it was a milestone in unmanned aviation,” said Maj. John Norton, the officer in charge of Cargo Resupply Unmanned Aircraft Systems with the Night Owls and a Rochester, N.Y., native. “It’s a stepping stone to increasing our capabilities in the unmanned aviation spectrum.”

The K-MAX system has been in use largely in the Pacific Northwest logging industry and most recently, in testing with the Marine Corps. While its purpose has been external cargo movements, users relied on a pilot to bring the aircraft to an idle mode while on the ground, hook up the cargo and then take off unmanned, explained Norton.

“[The traditional method of external lifting] takes time and requires more personnel to operate,” said Norton. “With a hot hookup from the hover, we’re able to come into the zone more expeditiously, which gives us more time to go forward with the fuel supply on the aircraft.”

The landing support team Marines with Combat Logistics Battalion 5 who participated in the ground-breaking training were no strangers to external cargo hookups, but working with an unmanned helicopter provided unfamiliar working conditions.

“Working with unmanned is a lot different,” said Sgt. Brianna Conte, a landing support team leader with CLB-5 and Lafayette, Calif., native. “Usually when we’re working with a manned aircraft we have pilots…and crew chiefs to look up to when we’re underneath the helicopter. With unmanned it’s not like that. We have the [air vehicle operator] and a spotter who are our eyes when we’re getting it all hooked up.”

The team of Marines broke ground for CLB-5, as well, being the first Marines to execute a hot hookup with a hovering unmanned helicopter.

“This is probably one of the best experiences I’ve had in the Marine Corps thus far,” said Conte. “I speak for my Marines when I say we were extremely excited. Not everyone can say they were the first ones to do something.”

The K-MAX is still in trials for use in the Marine Corps, but the platform has already moved more than one million pounds of cargo in six months of tests. On the first night of hot hookups, the squadron was able to move nearly 6,000 pounds of gear to Marines in remote locations.

“The possibilities this opens up for the Marine Corps is increasing our capabilities,” said Norton.

The Marine Corps has high hopes for the system, which moves cargo quicker and safer than a vehicle convoy on improvised explosive device-ridden roads.

The Night Owls and CLB-5 personnel will continue hot hookup trials throughout the month, pioneering a new, more efficient use of the unmanned helicopter system.