Wind and weather sensors are typically used for several UAV (unmanned aerial vehicle)-related applications. Meteorology sensors may be mounted on or around a UAV ground control station or launch area in order to gather data on local weather conditions, so that pilots can ascertain whether it is safe to fly. Weather measuring instruments may also be mounted on the UAV itself, weather drones can be used to collect data for applications such as environmental monitoring, climate change research, and precision agriculture. They can also be used to support accurate hovering and station-keeping for multirotor drones.

One of the most common weather measuring instruments is the anemometer, which measures wind speed and direction. The simplest anemometer designs are mechanical, using a mechanism such as a series of cups that turns a shaft at a rate proportional to the speed of the wind. Most mechanical anemometers cannot measure wind in three dimensions, and have a slow response time to sudden changes and gusts of wind due to the inertia of the mechanism. 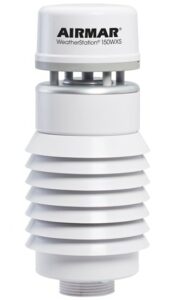 Another form of ultrasonic anemometer resonates ultrasound waves inside a cavity. As wind passes through the cavity, this affects the phase of the sound waves, and this phase shift can be measured and used to calculate wind speed and direction.

Ultrasonic anemometers can be manufactured with a very small footprint and light weight, making them ideal for SWaP (size, weight and power)-constrained drones. Ultrasonic wind sensors contain no moving parts and are thus less susceptible to shock and vibration. Some anemometers contain temperature-controlled de-icing mechanisms that allow them to function even in extremely cold conditions.

Ultrasonic anemometers may also incorporate other meteorological sensors, allowing them to collect other data in addition to wind speed and direction. These may include relative humidity, pressure and temperature sensors. Anemometers intended to be mounted on drones and other moving platforms may have built-in inertial sensors such as accelerometers in order to measure the yaw, pitch and roll of the platform.