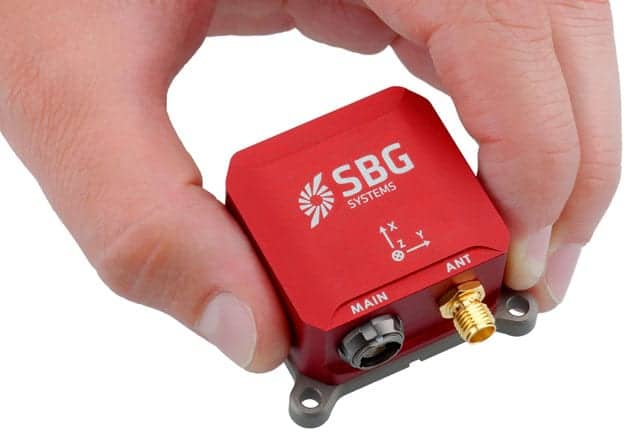 With the Ellipse Series, SBG Systems sets a new standard for miniature inertial systems. “Being the only one on the market to design both high-end and entry-level sensors, we are able to upgrade miniature sensors capabilities by injecting some advanced and proven filtering and features inspired from high end inertial navigation systems” added Guinamard. In addition to higher accuracy, SBG has added improved FIR (Finite Impulse Response) and rejection filtering, robust IP68-sealed enclosures, high output rate, RTK corrections and automatic alignment, for the same budget.

Weighing from 45 grams, Ellipse sensors are incredibly flexible. The Ellipse-A model provides 3D orientation and heave. For navigation, users are able to connect their own GPS with the Ellipse-E, or use the internal GPS integrated into the Ellipse-N model. The Ellipse-D completes the miniature sensor family, and integrates a Survey-grade L1/L2 GNSS receiver with two antennas for unmatched heading and position accuracy.

For the same budget and size, unmanned vehicle manufacturers and integrators are now able to achieve an orientation accuracy multiplied by five. As a result unmanned system navigation reliability can be improved, and sophisticated payloads such as high end or scientific cameras, radar, antennas, or LiDAR can be more accurately stabilized and orientated. Ellipse’s features perfectly match UAV requirements, including low noise gyroscopes and DGPS corrections for more accurate position data. UGV trajectory accuracy is enhanced thanks to the fusion of inertial, GNSS and odometer information. USVs benefit from additional heave performance, automatically adjusted to the wave frequency.