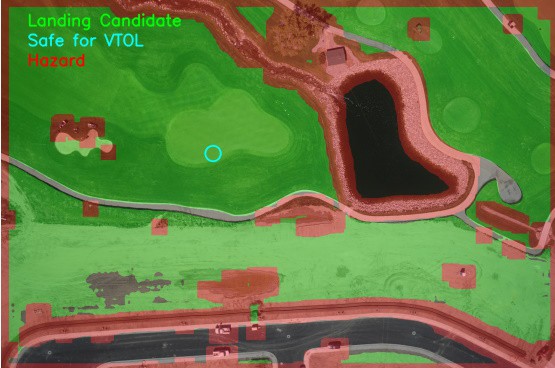 Black Swift Technologies (BST) has released a whitepaper detailing the development of the company’s SwiftSTL (Safe To Land) technology for unmanned aerial systems (UAS), which uses state-of-the-art machine learning and artificial intelligence techniques to autonomously identify a safe landing zone in the event of a major aircraft systems failure.

BST’s solution has been developed under a NASA SBIR grant and is currently being tested for commercial release. It processes high-resolution images quickly and efficiently onboard the UAS to enable the identification of objects and terrain that must be avoided during a safe emergency landing. The technology uses a machine vision technique known as semantic segmentation, which allows objects to be classified at the pixel level by assigning each pixel to a class label. Humans, animals, vehicles, structures and other objects can be designated as items to be avoided at all costs.

SwiftSTL gives the UAS a perception of the world around it by processing large amounts of data quickly and efficiently in order to make critical decisions in real-time. As well as safe landings, this classification technology can be adapted to a range of other applications, such as asset management, firefighting and wildlife management. It can also potentially be deployed on underwater ROVs (remotely operated vehicles) to perform tasks such as pipeline inspection.