Inertial Measurement Units are essential for UAV control and navigation. This article explores the technologies available and the suitability for each type of UAV application. Published: 30 Nov 2018 by Caroline Rees 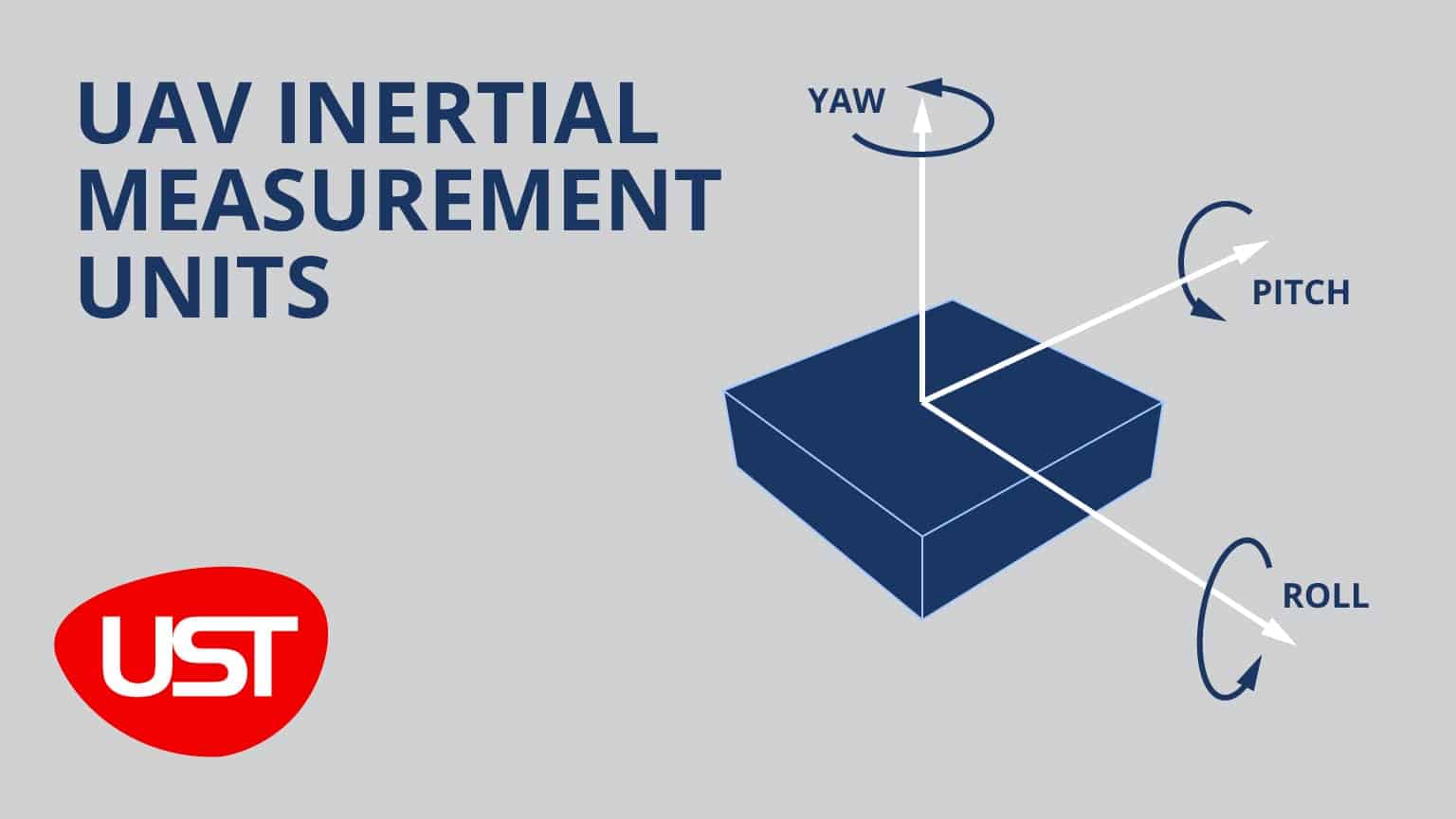 An Inertial Measurement Unit (IMU) is an electronic device that uses accelerometers and gyroscopes to measure acceleration and rotation, which can be used to provide position data.

The raw measurements output by an IMU (angular rates, linear accelerations and magnetic field strengths) or AHRS (roll, pitch and yaw) can be fed into devices such as Inertial Navigation Systems (INS), which calculate relative position, orientation and velocity to aid navigation and control of UAVs.

IMUs are manufactured with a wide range of features, parameters, and specifications, so the most suitable choice will depend on the requirements for a particular UAV application. This article outlines some of the key options and considerations, such as the underlying technology, performance, and ruggedness, in selecting an IMU for drone-based applications. It also highlights some of the leading IMU manufacturers for UAS (jumps to this section).

There are many types of IMU, some of which incorporate magnetometers to measure magnetic field strength, but the four main technological categories for UAV applications are: Silicon MEMS (Micro-Electro-Mechanical Systems), Quartz MEMS, FOG (Fiber Optic Gyro), and RLG (Ring Laser Gyro). 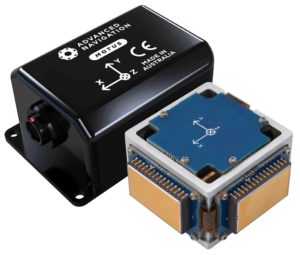 Silicon MEMS IMUs are based around miniaturized sensors that measure either the deflection of a mass due to movement, or the force required to hold a mass in place. They typically perform with higher noise, vibration sensitivity and instability parameters than FOG IMUs, but MEMS-based IMUs are becoming more precise as the technology continues to be developed. MEMS IMUs are ideal for smaller UAV platforms and high-volume production units, as they can generally be manufactured with much smaller size and weight, and at lower cost. 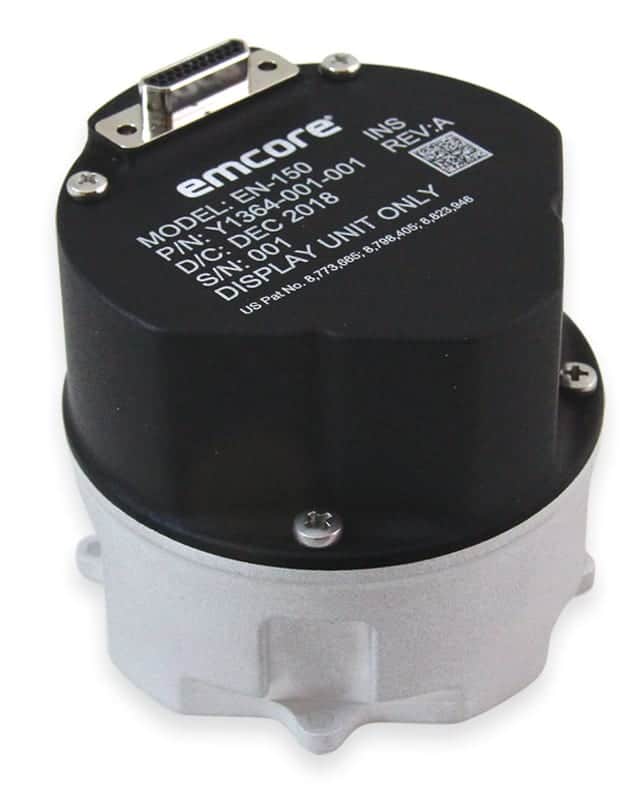 FOG IMUs use a solid-state technology based on beams of light propagating through a coiled optical fiber. They are less sensitive to shock and vibration, and offer excellent thermal stability, but are susceptible to magnetic interference. They also provide high performance in important parameters such as angle random walk, bias offset error, and bias instability, making them ideal for mission-critical UAV applications such as extremely precise navigation. Higher bandwidth also makes FOG IMUs suitable for high-speed platform stabilization. Typically larger and more costly than MEMS-based IMUs, they are often used in larger UAV platforms.

RLG IMUs utilise a similar technological principle to FOG IMUs but with a sealed ring cavity in place of an optical fiber. They are generally considered to be the most accurate option, but are also the most expensive of the IMU technologies and typically much larger than the alternative technologies. 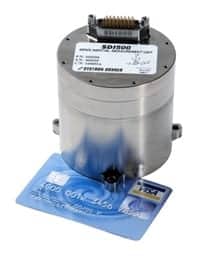 Quartz MEMS IMUs use a one-piece inertial sensing element, micro-machined from quartz, that is driven by an oscillator to vibrate at a precise amplitude. The vibrating quartz can then be used to sense angular rate, producing a signal that can be amplified and converted into a DC signal proportional to the rate. Quartz MEMS technology features high reliability and stability over temperature, and tactical-grade quartz MEMS IMUs rival FOG and RLG technologies for SWaP-C (size, weight, power and cost) metrics. These factors make it ideal for inertial systems designed for the space- and power-constrained environments of UAVs.

These factors are dependent on the technologies used in the IMU and the physical properties of the accelerometers, gyroscopes and magnetometers. If an IMU is manufactured with temperature compensation, this will improve the stability of the measurements.

For high-accuracy applications such as UAV surveying and mapping, a high data output rate is also important as this will reduce errors due to interpolation between readings.

In general, inertial sensors can be grouped into performance classes according to bias stability specifications which help to categorise the performance of a module. The higher the grade of sensor, the more accurate it tends to be. 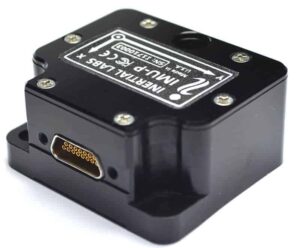 Typically, tactical- and industrial-grade IMUs are preferred for demanding applications such as UAV navigation, as they offer levels of high performance and accuracy.

Tactical-grade IMUs have gyroscopes with an extremely low in-run bias stability, meaning that the offset error is more stable over time. This is a necessary quality for mission-critical and high-precision applications such as UAV navigation and antenna and weapon platform stabilization. 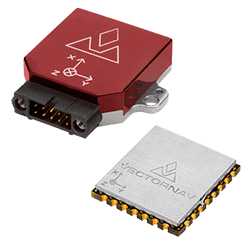 MEMS-based IMUs are commonly used for industrial-grade applications, such as UAV platforms requiring small form factor components over other performance parameters for stabilization, control, and navigation.

In addition to consumer, industrial and tactical-grade IMUs, higher grades are also available: navigation-grade, and strategic or military-grade.

IMUs for UAVs will often need to be highly rugged in order to withstand demanding environments, such as high levels of shock and vibration, as well as wide temperature ranges. Enclosures may be made of materials such as precision-machined anodized aluminium, and be rated to various standards of ingress protection (environmental sealing) such as IP67, to provide protection from board stresses and hazards due to harsh environmental conditions. IMUs with low vibration sensitivity provide higher accuracy navigation solutions in harsh UAV applications where vibration levels are high.

ITAR (International Traffic in Arms Regulations)-free IMUs are not restricted by export controls that require a license to transfer any system around the world that contains ITAR-controlled technology. Using an ITAR-free IMU in an unmanned system design will simplify international sales of the final product.

IMUs that are designated as Significant Military Equipment (SME) and thus controlled by ITAR regulations include those specifically designed for unmanned aircraft that are also ITAR-controlled, as well as those designed for weapons or weapons systems. 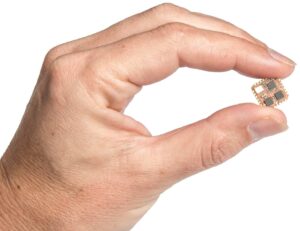 Size, Weight and Power requirements (SWaP) are key considerations in the design and development of UAV platforms, and many manufacturers aim to reduce the overall size and weight of their systems in order to fly greater distances, extend flight times, or increase payload capacity. This has led many IMU suppliers to develop miniature IMUs with extremely low weight and small dimensions to meet the SWaP requirements of UAVs.

Engineers designing systems for UAV applications need to define and prioritize the performance, SWaP and cost factors that are most important to the success of their design in order to select the appropriate IMU and technology. Comparing IMUs based on their specific technologies and performance strengths and weaknesses will be a key factor of the design process.

The inertial sensor market spans an enormous range in terms of product price and performance; here is an overview of some of the leading IMU manufacturers: 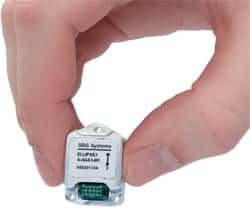 SBG Systems is a supplier of MEMS-based ITAR-free inertial sensors that balance cost, size and performance for unmanned systems applications. The Ellipse 2 Micro Series is SBG’s smallest high-performance IMU, weighing in at 10 grams with a small form factor designed for SWaP-conscious unmanned systems. The IMUs can be interfaced with a GNSS receiver for increased accuracy position, heave and heading output. Learn more >