Voyis has released an article which discusses the differences between Remotely Operated Vehicles (ROVs) and Autonomous Underwater Vehicles (AUVs), both of which can carry instruments, take samples, and conduct surveys, while allowing researchers to follow their progress from a distance.

Today we rely on robotic underwater vehicles, equipped with powerful sensors, to get us to remote regions to survey large areas of the deep sea. These vehicles are constantly evolving, gaining new capabilities that enable us to travel further than before.

Whilst crewed submersibles have allowed humans to visit depths of over 4000m, they are complex, high risk, and costly to operate, making them ineffective for expansive surveys.

Nowadays, two kinds of vehicles are used in deep-sea research: remotely operated vehicles (ROVs) and autonomous underwater vehicles (AUVs). Both are marvels of engineering and can carry instruments, take samples, and conduct surveys, while allowing researchers to follow their progress from the safety of a ship.

An ROV is an underwater vehicle that is operated from above the water’s surface. It remains attached to a controller by a tether. The tether allows the crew aboard the ship to reel in the ROV at the end of a day’s exploration. It also limits how far from the research vessel the ROV can travel on its own. The tether’s length can vary, depending on the project and the ROV’s depth rating.

Once they are in the water there are many different applications for ROVs. With the use of an ROV skid, the vehicle can have laser scanner and imaging systems connected, giving the team on the surface a view of the ocean depths. The ROV can send video and images to the surface, shining a light on what might be underwater.

Our Perception ROV Skids for inspection and Work class ROVs help simplify the integration of laser scanners and imaging systems without impacting vehicle dynamics. It incorporates a co-located inertial navigation system (INS) and doppler velocity log (DVL) with factory calibration to avoid in-field patch tests. These skids are designed for industry leading ROV platforms and can be adapted to your existing vehicle. The power distribution and communications through a single connection for the entire skid to drastically improve offshore integration. 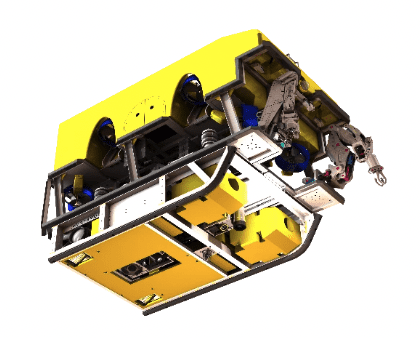 One of the core advantages of using tethered ROVs is the ability to see datasets captured in real-time, allowing operators to verify the quality of the information captured within a survey. This is critical for operations such as inspection of offshore assets such as pipeline, or subsea structures to ensure sufficient data is captured to monitor the state of the in-field condition and whether intervention is required. Given this real-time feedback, operators are able to quickly adjust survey mission objectives to resolve immediate concerns without having to wait for the survey to be complete. This level of flexibility is crucial for asset owners when performing inspections in the ever-changing subsea environment.

Although remotely operated vehicles eliminate the human presence to reduce costs and improve safety, their slow speed also makes them inefficient for capturing wide-area datasets. For these operations, the ideal platforms are Autonomous Underwater Vehicles which can dive to depths of over 6000m, travel at speeds up to 6 knots, and can carry a wide range of sensor payloads.

AUV stands for autonomous underwater vehicle and is also known as uncrewed underwater vehicle. These vehicles can be used for underwater survey missions such as wide area exploration, detecting and mapping submerged wrecks, rocks, pipelines and obstructions that can be a hazard to navigation.

An AUV conducts its survey mission without operator intervention. When a mission is complete, the AUV will return to a pre-programmed location where the data can be downloaded and processed.

Though crew members program AUVs before lowering them into the water, some can change their programming or adapt their missions on the fly, based on the conditions they encounter in the water. Usually, an AUV has sensors that allow it to detect water temperature and other conditions. The AUV might change course or complete its mission sooner than expected, based on the information it collects.

Our Recon AUV Payload allows for laser scanners and imaging systems to be connect to the vehicle, using a pre-integrated payload that simplifies integration and allows you to capture incredible optical data at high speed. 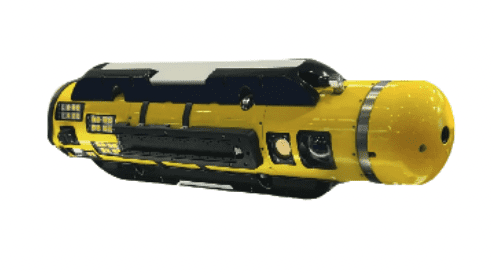 The concept of using AUVs for wide area exploration was demonstrated by Ocean Infinity with their HUGIN AUVs in their search for the MH370 aircraft wreckage. During their search they noted that their fleet emitted 72% less CO2 on average and covered 125,000 square kilometers of seabed in just 138 days – a far cry from the 837 days it would take typical survey vessels. With this incredible achievement it is evident that AUVs are enabling researchers to access the deep, at a lower cost, and with a reduced environmental impact. But getting there is just the beginning. Having tightly integrated, high-resolution sensors onboard is paramount to improving our understanding of the world’s last frontier.