This case study is based on an article authored by RCV Engines, highlighting how their DF70LC multi-fuel engine was incorporated into a new long-range unmanned helicopter design from Sentinel Unmanned.

Sentinel Unmanned set themselves the challenging design brief to engineer a small unmanned aviation system (sUAS) that would be both innovative and class-leading. It was decided that the system must be small, long ranged, capable of running on heavy fuel, and rotary-winged to allow the ability to hover in a single position. In addition, the platform had to be capable of carrying a large payload.

A number of other factors were also important to the brief: 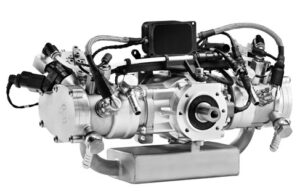 From the start of the project, Sentinel worked closely with the RCV team to understand the requirements fully and to develop a specification that would allow the design goals to be met.

The propulsion solution selected for the new platform was the RCV 70cc twin cylinder liquid cooled unit (DF70LC). This compact engine offers an excellent power to weight ratio, a liquid cooling system and provides the ability to operate using heavy fuel (JP5/JP8) as well as gasoline.

The airframe was designed in close co-operation with RCV to optimise the engine integration process.

The incorporation of the DF70LC into the Longreach unmanned helicopter provided the platform with a number of advantages:

According to a member of the Sentinel Unmanned team: “The Longreach platform is now one of the leading sUAS on the market. This would not have been achieved without the RCV engine. We have been able to fulfil all items on the original design brief and more.”

“The collaboration with RCV has proved invaluable to the success of the project. “Now that we have used the RCV engine we would not hesitate in recommending it for use in other platforms.”

Specifications of the final Sentinel Longreach 70 UAV platform include: