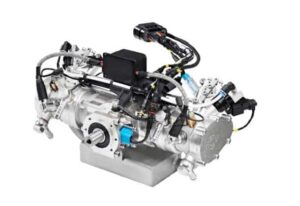 RCV Engines’ Technical Director has authored the following article that highlights how the company’s heavy fuel engines for UAVs (unmanned aerial vehicles) have been tested and used at higher altitudes.

The key selling point of RCV’s UAV engines is the excellent heavy fuel (HF) operation. This is due to RCV’s near-ideal combustion system, which ensures that the engine is tolerant to changes in air fuel ratio, ignition timing, air temperature, engine temperature and fuel composition. This tolerance to ambient conditions gives the additional operational benefit of reliable HF operation at altitude.

RCV are aware that some HF engines with less rugged combustion systems have struggled to run reliably at altitude. If a combustion system is marginal, then thin, cold air will make HF running even more challenging. The RCV is as tolerant of barometric pressure as it is of other combustion related variables, and keeps on running regardless. Once fuelling is adjusted according to the barometric pressure read by the ECU the RCV engine operates as well at 15000ft as it does at sea level.

Maximum operational altitude will, as usual, depend on airframe weight and aerodynamic efficiency. RCV engine-powered UAVs operating on JP5 and JP8 are routinely operating at 3500m (11000ft). Maximum altitudes of 4500m (15000ft) have been attained, with higher altitudes possible with lightly loaded aircraft

For an in-depth explanation of the RCV combustion system, visit this page on the company’s website.