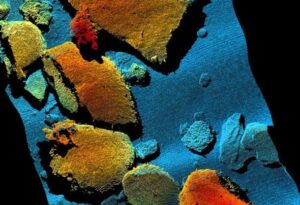 For the survey, the ROV was equipped and navigated using Sonardyne’s inertial navigation sensor, SPRINT, interfaced with a Syrinx 600 kHz DVL, ROVNav 6 LBL transceiver and a precision pressure sensor. EIVA’s hydrographic survey and navigation software was integrated with the ULS-500 using EIVA’s dedicated driver for 2G Robotics’ systems to facilitate with data capturing and post-processing.