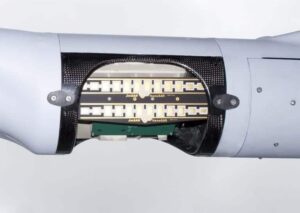 IMSAR LLC, a developer of Synthetic Aperture Radar (SAR) devices and radar image processing technology, has announced that its family of collision-avoidance radar systems targeted for small Unmanned Aircraft Systems (UASs) is on track for airborne demonstrations of the first prototypes by the end of 2015.

The family of radar systems will provide collision-avoidance capabilities to small UASs, ranging from package-delivery quadcopters to military Intelligence, Surveillance, and Reconnaissance (ISR) platforms, such as AAI’s Shadow and Insitu’s ScanEagle. IMSAR is designing the collision-avoidance radar systems based on its current 1-lb NanoSAR and is planning to offer them at a cost in line with small UASs. The initial model should be available for sale in late 2016.

According to Dr. Britton Quist, Lead of IMSAR’s collision-avoidance development, “Radar is ideally suited for the sense-and-avoid problem because it can operate effectively at night and in low-visibility conditions, such as clouds, fog, smoke, and precipitation. This is a capability unmatched by optical, acoustic, infrared, or LiDAR sensors.”

The Federal Aviation Administration (FAA) of the United States currently requires an aircraft operating in civil airspace to be able to “see and avoid” other aircraft. Collision-avoidance systems seek to meet this requirement by allowing UASs to detect other airborne objects, predict potential midair collisions, and automatically maneuver the UAS to avoid catastrophes. A radar-based sense-and-avoid solution for small UASs was previously not viable due to the high cost, the low weight, and the complex technology and algorithms required for such a system. IMSAR’s solution addresses those concerns, and will enable small UASs to avoid midair collisions as well as manned aircraft, paving the way for the integration of UASs into civil airspace around the world.

Adam Robertson, Vice President at IMSAR, said, “As the producer of the NanoSAR, the world’s smallest ISR radar system for UASs, IMSAR is in a unique position to fill a gap in current technology by providing a radar-based, collision-avoidance solution for small UASs.”