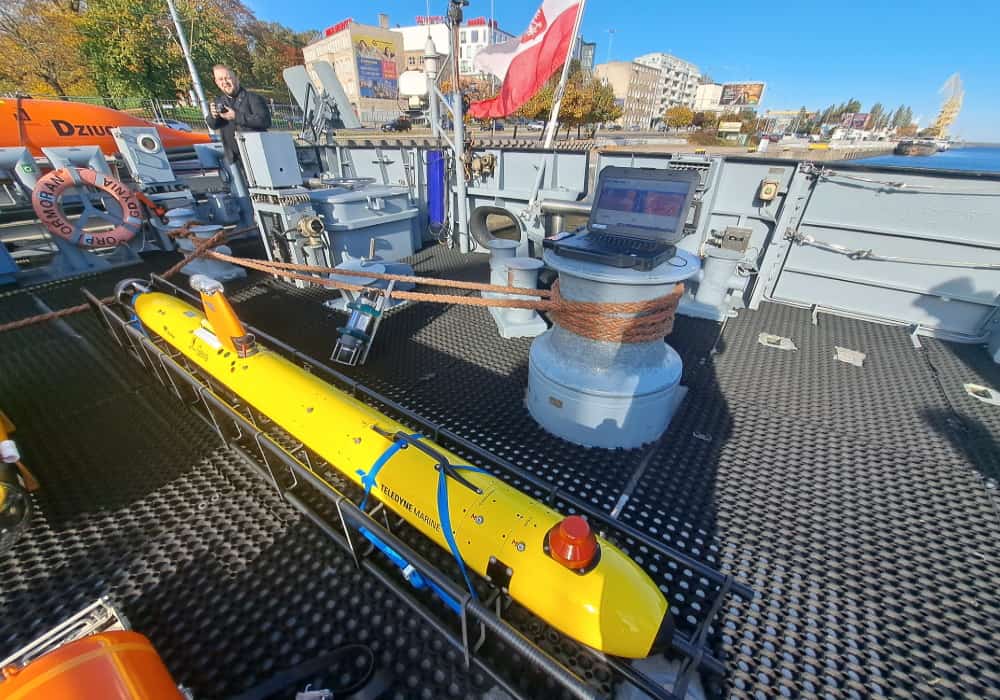 Teledyne Marine has confirmed that the Ministry of Defence of Poland has procured three additional GAVIA Autonomous Underwater Vehicles (AUVs) for its next batch of Kormoran II Class mine countermeasure vessels (MCMVs). To complement the GAVIA AUVs previously procured, the acquisition will include all required topside equipment, as well as the AUV operation and maintenance trainings.

The GAVIA vehicles will mirror the AUVs previously delivered, and will be equipped with the latest EdgeTech 2205 side scan sonars and BlueView MB2250 microbathymetry modules, providing simultaneous dual frequency 600 /1600 kHz side scan sonar with gapfill. Inertial navigation will be provided by the iXblue PHINS C5 INS, aided by a 600kHz Pathfinder DVL. Additionally, to enhance interoperability with other systems, the AUVs will be equipped with Kongsberg Maritime C-Node modems for USBL tracking from the Kormoran II class MCMVs.

With the imaging and navigation sensors listed above, the AUV will be able to gather high resolution, accurately navigated, sonar images while remaining submerged for several hours of continuous operation at survey speeds up to five knots. Each GAVIA AUV will be delivered with several field-replaceable battery modules.

The combination of sensors ensures that the GAVIA AUV is ideal for mine countermeasures, as well as search and salvage operations, in continental-shelf waters and beyond. Future addition of a Reson T20 Multibeam Echosounder will provide expanded capability for pipeline tracking and inspection of critical infrastructure. GAVIA AUVs in Poland continue to be supported locally through Enamor Ltd, Teledyne Gavia’s official representative in Poland. Enamor is a research and production company focused on new technology and active in many projects in Poland in the fields of navigation, communication, hydrography and automation.

The GAVIA AUV has a low-logistics, fully modular design. The design facilitates rapid transport and maintenance, and is also designed to increase operational availability and reliability. Each GAVIA AUV can also be equipped with a variety of additional sensor modules at the time of initial purchase or at a later date. This versatility creates an asset which can be configured for MCM, search & salvage or hydrography missions, without needing to be dedicated to just one task. In the future, the AUVs delivered in Poland can be equipped with modules for multi-beam bathymetry, sub-bottom profiling, or even submarine emulator sonar training targets, without returning any of the equipment back to the manufacturer.

Expansion in Poland is a significant milestone for the GAVIA AUV user community, as it demonstrated the confidence of GAVIA AUVs for MCM by the Armed Forces of Poland. Previous knowledge gained from operating the GAVIA AUVs in Poland has helped develop the concept of use of AUVs in the Polish maritime theatre. Significant benefits have been demonstrated with the use of a low-logistics AUV asset that continues to carry out both MCM and hydrography missions.

Maciej Rek, CEO of Enamor, stated: “Over the years, Teledyne Gavia and Enamor have formed a strong relationship based on the success of the Gavia AUV in Poland, as well as the local support that has been provided by Enamor.”

Valentin Hanns, Director of Sales – EMEA at Teledyne Marine, said: “We are very excited to see the continued success of the Polish Navy with the use of the GAVIA AUV. The GAVIA AUV operational flexibility, the ease of through-life support, and modular upgrade paths have really contributed to the suitability of this AUV for addressing a variety of critical defense challenges.”