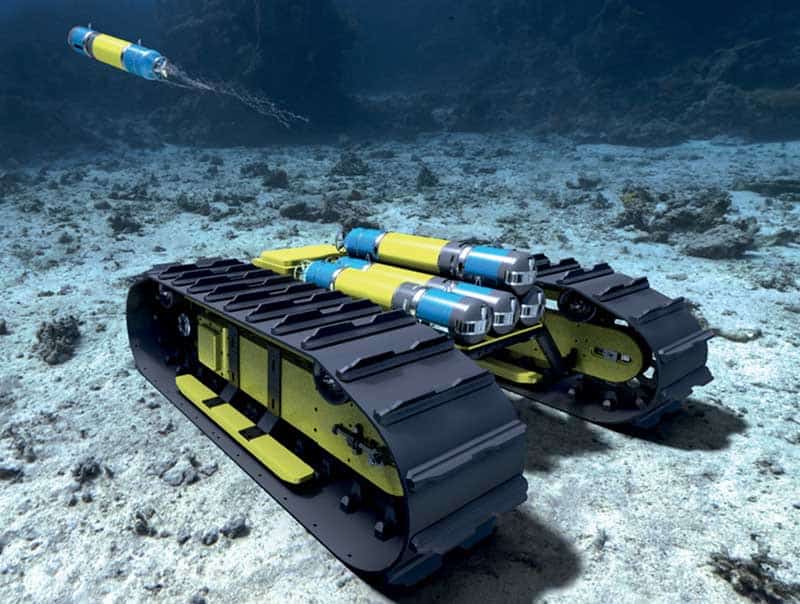 Marine robotics technology specialist Greensea Systems has launched Bayonet Ocean Vehicles, a new company created to develop, manufacture, and distribute a line of amphibious robots recently acquired from C-2 Innovations. These crawling robots are deployable from land or water and have been designed to traverse the ocean floor as well as operate on land.

The robots have been rebranded and are launched to market as the Bayonet 150, Bayonet 250, and Bayonet 350 vehicles. According to the company, they are the only robotic platforms in the world that are capable of working between 40 fsw (feet of sea water) and the dunes on the beach as well as in the deep ocean. Applications include amphibious operations and littoral warfare such as mine detection and clearance; seafloor, beach zone and river surveys; and environmental, monitoring and wharf inspections.

Bayonet joins the Greensea group of companies as an independent entity managed by the Greensea Executive Team. Founder of C-2 Innovations Arnis Mangolds joins Bayonet Ocean Vehicles as VP Programs, and previous C-2 Innovations’ Principal Investigator employee, Mike Farinella takes the role of Senior Engineer of the new company. The company is based in Plymouth, Massachusetts, co-located with Greensea, in a newly renovated 17,000 sq.ft state-of-the art manufacturing facility with waterfront access for year-round testing and training.

Ben Kinnaman, founder and CEO of both Greensea and Bayonet, commented: “We have been working with C-2 Innovations since 2018, providing them with a C2 software suite built on OPENSEA. The seafloor crawling robot systems they developed are unique because they fill a void in autonomous ocean systems as they can work in the surf zone and carry larger sensor payloads on the seafloor. Bayonet has the resources to scale and advance the product line, and strategically, the crawler product line complements Greensea’s autonomy portfolio for defense applications.”

Rich Amirault, Bayonet Ocean Vehicles’ Vice President of Operations, noted: “Because the conditions that these vehicles operate under – very shallow water, heavy surf, and poor visibility – are the perfect environments for improvised mines, providing an autonomous solution for EOD missions is a necessity. We are building vehicles to go where boats, divers, and ROVs simply cannot go, using software that is proven on thousands of vehicles. It’s exciting to be with the company from the start, making products that I believe in.”