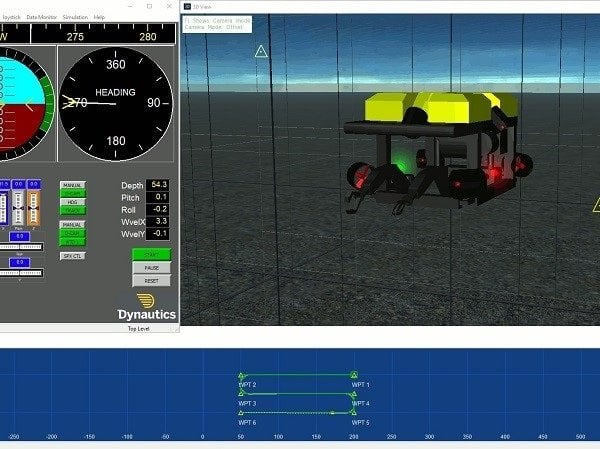 Dynautics has released the following article detailing how AUV (autonomous underwater vehicle) and UUV (unmanned underwater vehicle) developers can benefit from effective simulation tools that allow the development cycle to be shortened and carried out in a more cost-effective manner.

Developers of AUVs and UUVs benefit greatly from effective simulation tools that support the complex design process of these technologies. When design iterations can be modelled, tested and modified without the safety risk and expense of scale or full-size models and test tanks, the development cycle is shortened and the road to achieving a commercially viable and successful solution becomes safer, faster and more cost-effective.

Marine simulators are powerful tools, enabling developmental and pre-commissioning sea trails to take place in the safety of the lab before committing to the rigours and cost of a real sea trial.

AUV Sim was developed based on Dynautics’ Ship Sim, a proven vessel simulator for surface craft. Ship Sim has been used not only for surface vehicle design but also for training, with systems installed for the Royal Navy that support helmsman and navigation training. As with Ship Sim, AUV Sim comprises a physical simulation of the vehicle, variable testing environments and a comprehensive suite of navigation sensors.

The AUV/UUV is built by assembling standard modules, such as static bodies, fins, hydroplanes and thrusters. Size, position, orientation, drag coefficients, displacement and mass, plus parameters such as actuation speed can all be configured, with an Added Mass module that allows for non-linear hydrodynamic forces. AUV Sim’s comprehensive vehicle build toolkit enables users to assemble anything from a work-class Remotely Operated Vehicle (ROV) to a torpedo or even a sea glider propelled by a gravity engine.

The assembled vehicle is visible as either a wire frame model or 3D render, for a more realistic display. The operator connects controls to each actuator, driven manually by sliders, by the built-in autopilot or by external control signals. External control signals are simple to implement in a variety of formats, one of the easiest being serial data sentences in the well-known NMEA0183 format. These can be used to set machinery channel demands. The software can be configured to transmit navigation sensor data from a wide range of onboard sensors, including INS, DVL, gyro and magnetic compass, USBL etc. Data rates and noise characteristics can be adjusted allowing the external autopilot system to be comprehensively put through its paces.

Dynautics’ AUV Simbox enhances the functionality of the software only AUV Sim solution by including the hardware elements. This kit, conveniently packed into a portable, robust Peli Case, gives the AUV developer everything they need to take a project from inception through to sea trials by creating both a virtual and hardware environment. AUV Simbox, containing the simulator software, a SPECTRE autopilot module, RCW front end Remote-Control Workstation (RCW) software, a GENIE analogue and digital interface as well as power supplies and cables, saves time by enabling the testing of the MicroSPECTRE firmware before it is installed in a real prototype.

The SPECTRE autopilot can control a wide range of vehicles and the Dynautics team frequently implement new features. They recently accommodated the need to allow a small, fast vehicle to corkscrew through the water without losing control, a demanding requirement necessary in the early phase of the mission where there was insufficient speed for the fins to effectively keep the vehicle upright against the propeller torque reaction.

AUV Simbox delivers for the US Navy

In late 2019 AUV Sim was used to deliver several AUVs to the US Navy in record time – just 100 days from order to on-water testing. AUV Simbox enabled the project team to develop the Phantom AUV, simulate it, manufacture parts, execute the build and get the vehicle out for real sea trials within that time. The sea trials, which took place in Plymouth, UK, verified the controllability and performance of the vehicle, confirming the predictions made during simulation. Production vehicles were delivered soon after and commissioned in Florida, USA.

The success of this project, with its aggressive delivery timeline, clearly demonstrated how AUV Sim reduces timescales, risk and cost. Rapid prototype development enabled the US Navy to quickly test ideas and thereby broaden the scope of their unmanned vehicles innovation drive.

Other projects that have benefited from the use of AUV Sim before sea trials include a work-class ROV project in the Gulf of Mexico, where the SPECTRE system was successful in achieving positional stability around 15mm rms, precise enough to engage a hot-stab using the SPECTRE DP system. In a separate initiative, SPECTRE was fitted to DSTO’s Wayamba ROV in Melbourne with immediate success. DP trials showed stability down to the resolution of the INS position reporting (c. 10mm).

In China, AUV Simbox has helped AUV/UUV developers to achieve a dramatic reduction in development time, a key element of mission success. Access to water tanks or lakes is expensive, so testing the design and adapting it via simulation prior to on-water trials represents a significant resource saving.

Simulation for the next generation

The Dynautics management team worked closely with the Society of Maritime Industries’ (SMI) earlier this year to develop a robust roadmap for their Marine Autonomy Challenge, dubbed the MAChallenge, which is a competition designed to encourage young marine technologists and support them in developing careers that contribute to the future of the UK’s Marine Autonomous Systems (MAS) industry.

Due to ongoing pandemic-related restrictions, the SMI had to figure out how competitors could develop their solutions without physical access to the boats, the water and other hardware during the early stages of development. Dynautics, gold sponsor of the MAChallenge, is providing its simulator solutions to ensure that the 2021 competition goes ahead using a virtual testing environment, harnessing current technology to ensure the future resilience of the maritime sector.

Design and simulation tools for AUV/UUV and USV designers