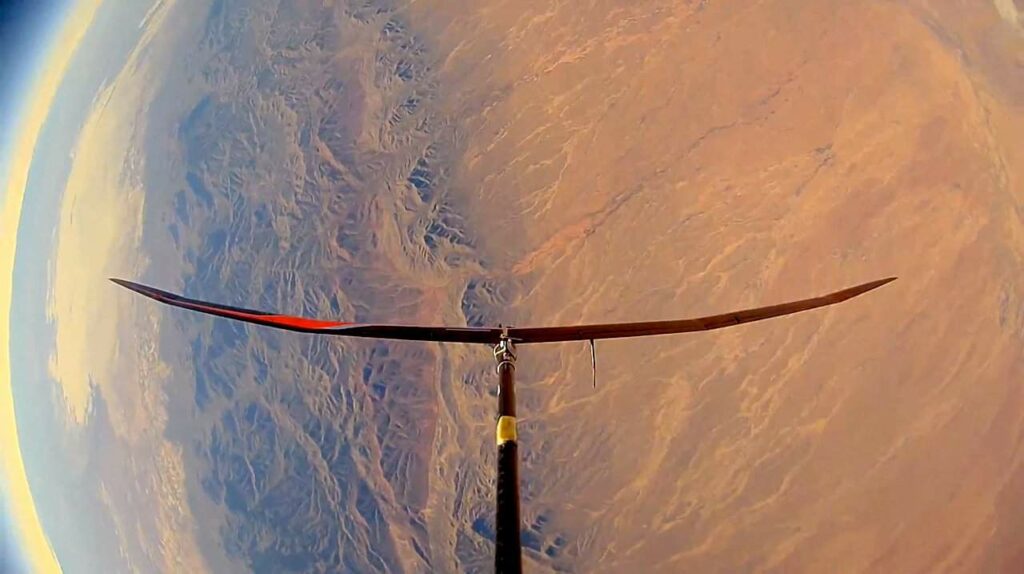 UAVOS, in conjunction with Stratodynamics, has successfully performed a series of stratospheric flights with its autonomous HiDRON unmanned glider. Supported by the NASA Flight Opportunities Program, the flights tested turbulence detection sensors developed by the University of Kentucky (UKY) and NASA’s Langley Research Center, in order to advance new forward sensing turbulence detection technologies for aircraft at near-space and commercial flight altitudes.

The HiDRON UAV (unmanned aerial vehicle) was launched from a balloon at an altitude of 82,000 ft. (25 km) for the first two launches, and at 98,000 ft. (30 km) for the final launch, gliding successfully at 92,000 ft (28 km). The HiDRON was released from the balloon in zero-gravity conditions and accelerated rapidly, approaching 300 mph ground speed (480 kph) in the first 15 seconds of flight. The HiDRON then glided in a controlled flight path back toward Spaceport America’s runway for approximately 4.5 hours while recording flight and payload data.

The UAVOS-designed avionics system demonstrated stable performance in extreme temperatures from -85°F (-65°C) to +95°F (+30 °C), as well as a breakthrough in autonomous control during the critical ‘pull-out phase’ following balloon release. The system ensures safe Beyond Visual Line of Sight (BVLOS) flight profiles throughout the various phases of lift-off, ascent and landing.

During the mission, the aircraft’s autopilot took measurements and recorded navigation data on a flight recorder with a frequency of up to 400 Hz. Onboard sensors (including acceleration sensors, angular velocity sensors, GNSS, magnetometer, air data sensors, and temperature sensors) allowed it to record wind velocity, direction, magnitude, and low-frequency sound waves. High-altitude aerodynamics data has proven invaluable for processing payload data as well as for analyzing atmospheric phenomena in the stratosphere.

UKY researchers will spend the next few months analyzing the sensor data to identify turbulent events and their proximity to the airborne sensors.

Dr. Sean Bailey of the University of Kentucky commented: “The HiDRON aircraft was an ideal platform for these investigations. Its controlled descent provided us with many hours of data and increased our ability to observe randomly occurring events. We look forward to examining the data more closely to see what we can learn about turbulence in the atmosphere.”

Gary Pundsack, CEO of Stratodynamics, said: “This mission represents a major milestone for Stratodynamics in achieving controlled, autonomous flight at record-setting altitudes and with an aircraft’s aerodynamically efficient airframe capable of utilizing available natural energy. The HiDRON also performs as an extremely sensitive instrument that can detect turbulence and correlate data collected from payload sensors. This campaign will contribute to Stratodynamics’ turbulence detection systems currently in development for multiple aviation-based applications.”

Scott McLaughlin, Executive Director of Spaceport America, noted: “This truly is exciting science and technology. It combines UAVs, balloons, and infrasonics to measure turbulence in the atmosphere in a way no one else has done. We are very happy to have had their team testing at Spaceport America.”

UAVOS’ lead autopilot developer and CEO, Aliaksei Stratsilatau, stated: “The HiDRON successfully completed all of the missions proving that UAVOS’ scalable, fully integrated avionics system, as well as flight-proven hardware continue to ensure HiDRON is at the forefront of stratospheric missions for the long-term. This succeeded today thanks to the combined hard work of NASA’s Langley Research Center, Stratodynamics Inc., the University of Kentucky, and the UAVOS team.”